For those of us who live along the Jubilee Line area while have had a couple of years of delays and weekend closures as the line was upgraded to Automatic running – the core benefit being able to run trains closer together and slightly faster.

The completion of this long running saga has been expected at some point around the August time, and roughly once a week I would query the TfL timetables to see if their future had been changed so I could glean some idea of when the upgrade would be finally switched on.

Needn’t have bothered as today I saw a sign at Canary Wharf promising many delights from next week as the new timetable switches on Sunday. 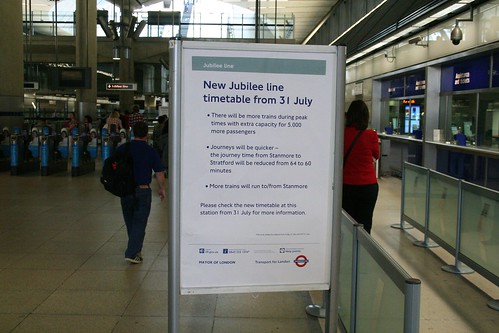 Doesn’t look like a lot, and the journey’s certainly aren’t any faster for me – although across the entire line, there will be a four minute saving. Again, four minutes wont sound like a lot either, but over an entire day that adds up and in theory, presuming trains ran absolutely perfectly etc, that means each train can fit in one extra trip along the line.

That’s where part of the capacity increase comes from.

Due to the numbers of people trying to catch the trains in the evening, it takes me on average 3 trains before I progress from the back of the queue to the front. The increase in trains per hour should make that wait rather shorter.

It’s taken a lot longer to get to this point than it should have thanks to stupidities at the contractors, and the weekend closures have been a nightmare – especially as the DLR never seemed to increase capacity to cope with the extra traffic. *evil glare*

I guess I can take some “big society” satisfaction in knowing that the lessons from the Jubilee Line upgrade have been taken to the rest of the network and the upgrades of the other lines wont suffer the delays and closures that we Silvery Line residents have had to put up with.

But I might smile slyly if they do get a load of weekend closures anyway.