Outsider Art – the somewhat patronizing term given to art done by artists who are not formally trained as artists in big artist training camps.

It is also the topic of an ongoing exhibition at the Wellcome Collection in central London.

A decent amount of the gallery has been given over to art works by autistic artists who have the ability to accurately reproduce what they have seen. Some of the works are replicas of comic book covers, and as such while I find the technical ability of someone to draw that from memory and in such detail to be utterly astonishing, these are just copies, not interpretations.

Where’s the art in a copy/paste?

My biggest ire though is for the art that is art.

There are works on display that are of really quite remarkable abstract representations and are to my untrained eye not noticeably different in quality from the sort of stuff I might see in the Tate Modern. 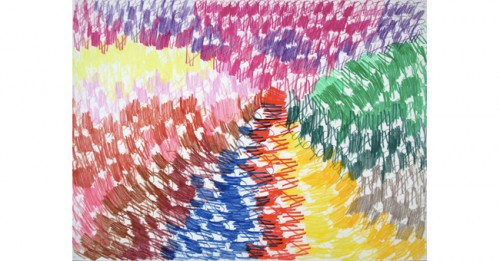 So why is this Outsider Art and what is the difference that denies it the hallowed elevation to Insider Art?

Once, only a genuinely skilled painter could paint a decent painting, only years of practice could result in someone carving stone or wood with any degree of skill.

Today, and it’s actually a good thing, anyone can make something, and call it an artistic development. Whether what I churn out is any good is another issue. But as almost anything can be art, what determines if one item gets sold at a car boot sale for £10 and the other put on display in a gallery for £1,000? They may be emphatically the same work of art, but it is not the art that determines the value any more, its the little white card that sits next to it.

A label. That’s all. Just the small piece of white card that sits next to the work of art.

If it says “I made this, it’s pretty”, then its Outsider Art.

If it says “This is a cohesive representation of a kinetic moment captured in frozen aspect with influences of 18th century revivalists in a modern naturalistic expression that defines boundaries without limitations”… then it’s Insider Art.

One of those two labels adds a couple of zeros to the value of the art it is sitting next to.

The art itself has become irrelevant.

When I receive press releases from art galleries, I scratch my head in confusion as to how people who seemingly left school able to speak plain English have left art college with the ability to totally mangle the English language into incomprehensible gibberish.

But of course, that is how modern art — or more the avant-garde movement justifies itself. Not through works that are in of themselves genuinely outstanding, but in how they spin a message of deep contemplation about the art that makes it sound as if this isn’t just a pile of bricks, but actually a really quite lengthy and complex artistic endeavour.

Is Insider Art actually one of the greatest con tricks of modern times? Throw together some things, call it art and write some wanky art speak on a white card.

If you can host a gallery event, mingle with people, put on airs and graces as an “artist”, then you’re in luck.

Pop along to the Wellcome Collection and play a game. If you didn’t know you were in a gallery of Outsider Art, how much of it would you not be that surprised to see on display in an achingly fashionable Insider Art gallery in Mayfair?

That’s the sad thing about Outsider Art — because it is Outside, the artists will never earn the sort of recognition, or money that the Insiders would be able to command for the same thing. And that is a shame.

The exhibition, Souzou: Outsider Art from Japan is open daily at the Wellcome Collection in Euston until the end of this month.