There is a rather small, but quite perfectly formed little exhibition going on at the moment, as part of the general James Bond/Ian Fleming centenary – and that is the cover designs of the original books as they were first released. 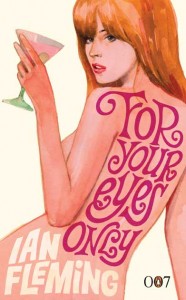 The venue is the appropriatly named Fleming Collection, on the refined Berkely Street (nr Bond Street), which is an art gallery devoted to promoting Scottish art and was created by the merchant bank, Robert Fleming & Co – the founder of which was coincidentally the grandfather of Ian Fleming.

As many of the original James Bond novels came out at a fairly important period in design, and also over quite a long time frame, the exhibition gives you the opportunity to see how cover designs reflected the trends of the time, while also changing over the years.

The collection also includes a lot of letters between Ian Fleming and the publishers discussing the designs and they really do add quite a lot of insight into how the book covers eventually finished up.

One rather notable letter accompanied a book, the name of which I forget but it was a few into the series where the “James Bond” name was put on the front cover for the first time and the letters show that they are convinced that this was a key reason for that book being a best seller as people were by now familiar with the character name.

There are also notes and covers from some of Ian Fleming’s non-Bond novels, such as Chitty Chitty Bang Bang and some posters from the movies.

Overall, this is quite a nice little exhibition, and bound to interest any Bond fan – but hurry as it closes this Saturday (28th June).