Sitting very much overlooked on a very small side street near the building site that is Blackfriars train station lies one of the oldest of the city’s Livery Halls, belonging to the Worshipful Society of Apothecaries of London. Not content with being on a small side street, the main hall then hides behind a small door with a sign hinting of the building behind. 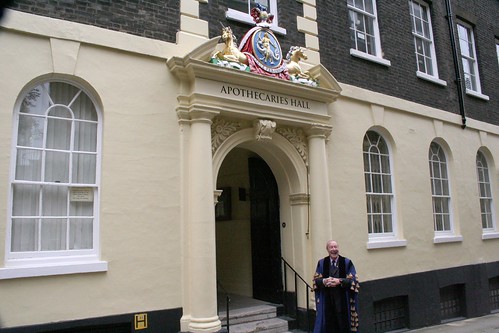 The apothecaries — which were medical plant growers — can trace their heritage as a group back to 1180, when they were part of the Guild of Pepperers, and later in 1345, they moved to the Grocers’ Company.

The apothecaries separated from the Grocers in 1617, when they were granted a Royal Charter, and during the rest of the 17th century its members challenged the monopoly of the College of Physicians.

The Livery Hall that they now use is not the original – that was destroyed in the Great Fire of London, and a new one was built in 1672. The building was “improved” in the 1780s and 1980s, but it still retains the title of the oldest extant livery company hall in the City.

They may have the oldest building, but they are just 58th in the order of precedence for Livery Companies in London.

Going in through the narrow entrance, is a large yellow courtyard – which is also shared with other occupants, but at the back is the main Apothecaries Hall.

A sign inside the dark wood entrance hall said no flash photography, but a question about non-flash photography was answered in the affirmative. Being an open day, the building was surprisingly packed full of people wandering around, which made taking photos a bit difficult!

Slowly snaking up the grand staircase – slowly as everyone was looking at the paintings and stained glass windows, and eventually up to the main first floor and into the Parlour, with a whole wall lined with the sorts of china pots used by apothecaries to store their dried herbs. 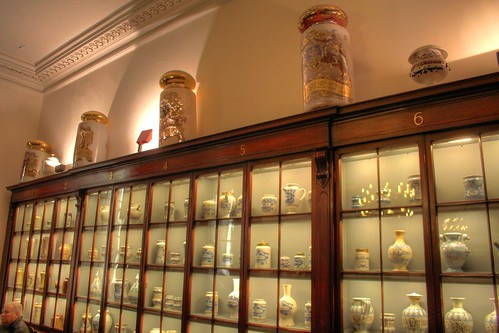 A rather fine map of the area from around the 1700s was impossible to photograph alas.

The much darker Court Room next door is dominated by two large stained glass windows, one depicting the Society’s Coat of Arms, the other the Stuart royal Arms.

Portraits adorn the walls and the painting which hangs over the fireplace is that of Gideon de Laune, Royal Apothecary to Queen Anne and founder of the Society. It was presented to the Society of Apothecaries in 1641. 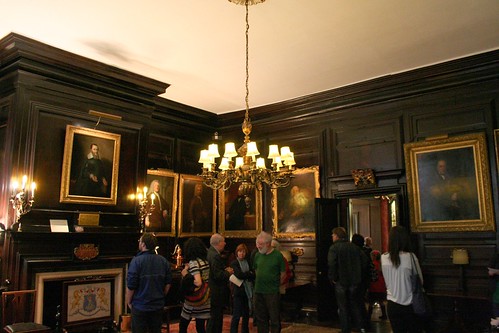 Time to squeeze back out onto the landing, and around to the Great Hall. All of London’s Livery Companies need a “Great Hall” it seems. This is certainly a hall that deserves the title of Great though.

A central 24-branch candelabrum suspended from the ceiling was presented to the Society by Sir Benjamin Rawling, who was Sheriff of London and Master in 1736.

The windows on the east and west sides of the Hall contain stained glass Coats of Arms of Past Masters and former Officers of the Society, and portraits hang on the walls. 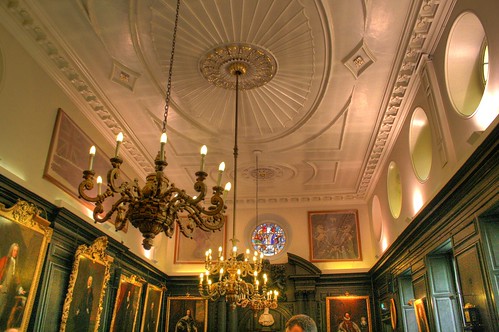 A few tables set up to show off the modern day works of the people who are members of the Apothecaries, including a sombre reminder of modern warfare – and a table selling ubiquitous branded trinkets.

No cups for sale though. 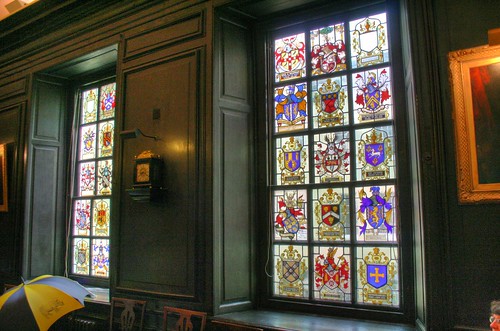