Inside the hidden vaults under the Clifton Suspension Bridge

Experts had long thought the mighty stone foundations of the Clifton Suspension Bridge were as solid as the bedrock they stood upon. The experts were wrong.

In fact, they are filled with vast vaults, and until just recently, no one knew they were here. Quite how that was possible is a tale now being told by the bridge which is now occasionally opening up the hidden spaces to the public.

A large suspension bridge spanning the deep Avon gorge seems like a sensible idea, to save people going down to the river and back up again, but there never was a road here, there was never a need to go down a steep path and up the other side. The road is as new as the bridge.

Travelers could easily use the bridge a bit further down river in Bristol itself, but it was old and narrow, so when Bristolian merchant William Vick left a bequest in his will of £1,000 in 1753 for a road and bridge, it seemed likely that something would be built soon.

However, it took another hundred years for anything to happen, and by then the Admiralty had a rule that no bridge could be built unless it offered 100 feet of clearance for shipping.

That ruled out a bridge in Bristol, but permitted one at the top of the nearby Avon gorge. After many designs, delays, a riot, some bankruptcies and numerous other woes, a new road and mighty suspension bridge over the Avon finally opened in 1864 — 111 years after it was planned. 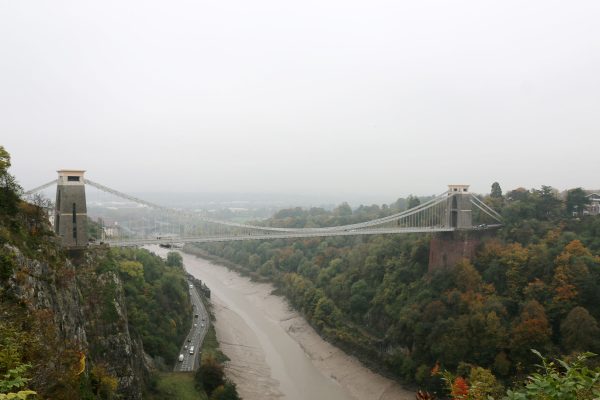 Apart from the very obvious suspension bridge itself, almost as impressive are the massive stone foundations which perch on the steep sides of the gorge and support the two tall towers. It was these which were to hold the secret of the lost vaults.

It seems that while the original and detailed plans of the suspension part of the bridge exist, the plans for the foundations were lost at some point. Possibly due to there being two different companies building them, or the various financial difficulties they got into. Whatever the reason, the plans were lost.

Over the years, people speculated about whether the foundations were hollow, and at times, deep drills were sent probing in, but always ran deep through stone.

It was obvious that the foundations were solid.

But, in 2002, while the paving slabs were being lifted for replacement works, a manhole cover was found on the Bristol side, and it showed a small brick vault containing an old coal stove, probably used by the original builders.

After a diversion to find a fake skeleton to put inside and only then notify the Bridge Master, all eyes turned to the other side of the Avon gorge, where the much larger foundations stood. Was there a manhole cover over there as well?

And yes, a manhole cover was found, but in this case it went down a deep shaft, which upon inspection led off to other shafts, and then, to massive vaults. Twelve in total.

Vast and for 140 years, they had vanished from view, and from memory.

If you’re both a communication between the two sides of the gorge, but also a major tourist attraction, you’re going to want to show off your newly discovered heritage, so for the past decade, works have been under way to open up these hidden spaces.

A sliver of land belonging to the National Trust next to the bridge offers a steep path down to a vertical ladder with perilous views over the gorge, to a narrow landing where engineers have drilled out a new entrance in the side of the bride.

It’s here that you might also appreciate why previous probes might have missed the vaults, as the walls at this thinnest point are still nearly 2 metres thick. A vast plug of stone was removed to create this new entrance, and they’ve kept the massive block in storage, just in case they want to seal the space up once more. 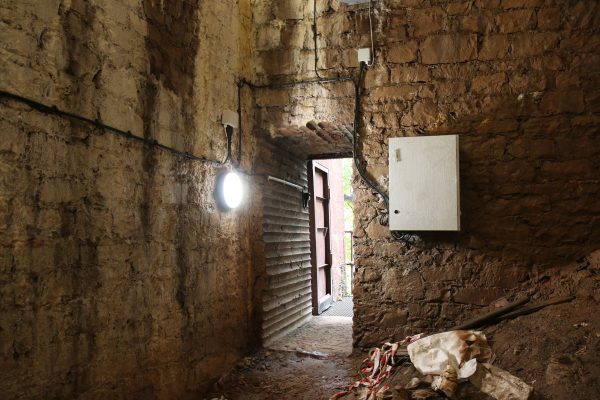 Hard hats firmly secured, passing through this newest addition to the bridge, and into the first of the huge vaults. Do try not to stop and stare in amazement at the space which seems bigger than the bridge should be able to contain.

The arched roof is now decorated by fine calcite straws — or stalactites — that add a Christmas tree effect to the space.

Using the International Standard for Measuring Things, the vaults are about the height of three double-decker buses.

A hole in the roof is now known to lead to another previously lost manhole cover, right in the middle of the road above, and if you stand silent, the rumble of motorists can be heard through the stone. 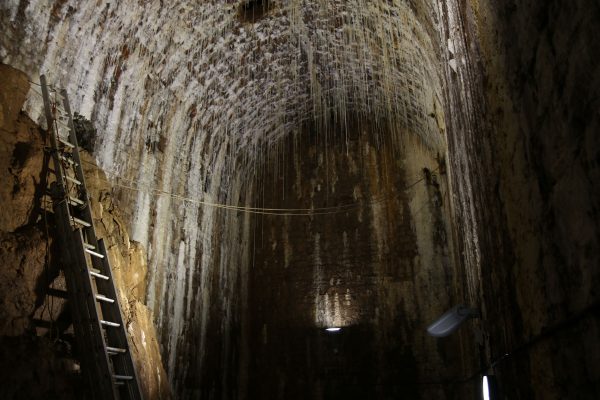 During construction, the builders didn’t smooth off the original bedrock but built around it, so here in a carefully constructed manmade stone vault, is a massive red outcrop of raw cliff face.

Crouching down to go inside and another smaller, and original tunnel leads into a second vaulted space, which has now been fitted with wooden flooring and metal steps up to the still mysterious round shafts. 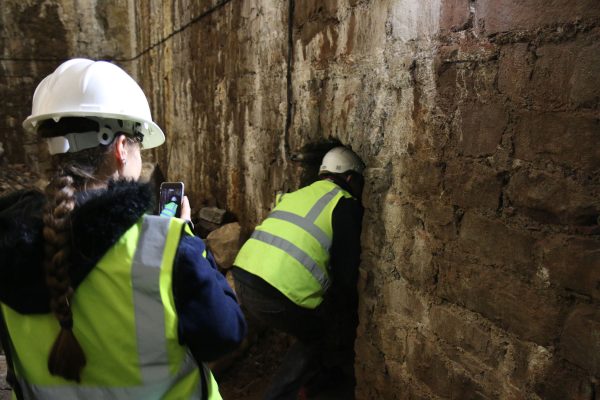 It’s an immense space, and although once you have seen all there is to see there’s not much to see, it’s the experience of standing in this long lost space that is enthralling.

Soak up the atmosphere of the chill damp air and admire Isambard Kingdom Brunel’s ingenuity. 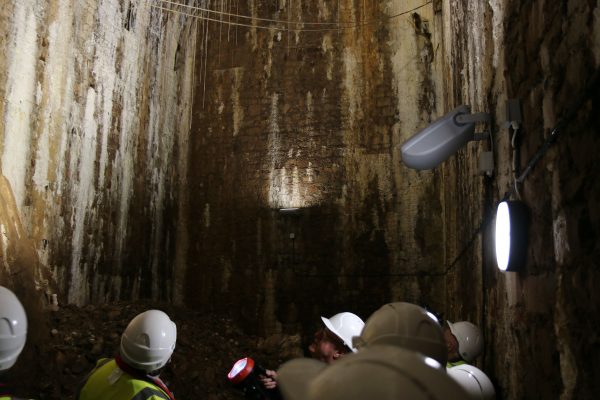 And yet you have seen but a small fraction of what’s down here. The vaults are on two levels, and visits are to the upper set, but in the far end is the recently installed metal staircase down to the lower level, which is still off limits.

Twelve vaults in total, you have seen two.

After a while, it’s time to pass back out into green and wooded lands, to climb up that metal staircase, to surrender hard hats and return to a normality which is now enlivened by what you’ve seen. 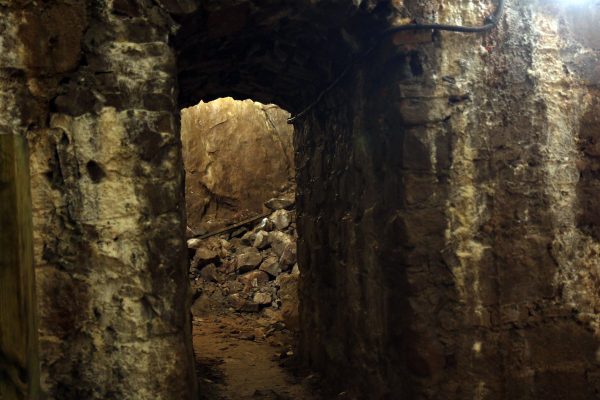 Walking back across the bridge, noticing how the western tower had corners cut at angles, while the eastern side were nicely squared. One of the great mysteries of the bridge was why — but the discovery of the vaults answered that long unanswered question.

But to find out what the answer is, you will need to go on a tour, and they are planned to resume from next March. Keep a very close eye on this page for details. 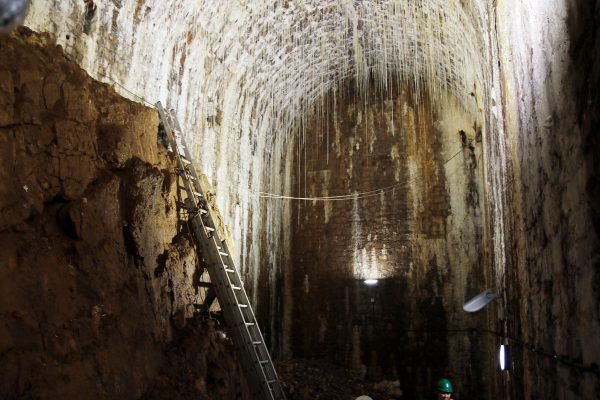