On this day in the year 1485, King Richard III died at the Battle of Bosworth, the last British Monarch to die in battle on English soil.

He was also the last king of the House of York and the last of the Plantagenet dynasty. His defeat at the Battle of Bosworth Field was the decisive battle of the Wars of the Roses and is sometimes regarded as the end of the Middle Ages in England.

However, I am more interested in the more recent activities of “The Fellowship of the White Boar”, which was founded in 1924 to undo what they saw as history’s tendency to malign the memory of the King. Specifically to redress the allegation that he instigated the notorious murder of the Two Princes in the Tower of London.

The society was reformed after WW2 as the Richard III Society, and for over a quarter of a century, the Society has placed a Memoriam Notice in the Daily Telegraph on the anniversary of his death.

You can find it on Page 32 of today’s Telegraph, on the same page as the Court Circular for the current Monarch, which seems amusingly apt.

It’s a young tradition being a mere 25(ish) years old, but all ancient traditions have to start at some point and I am not going to overlook this one just because it barely born as one of England’s great quirky traditions. 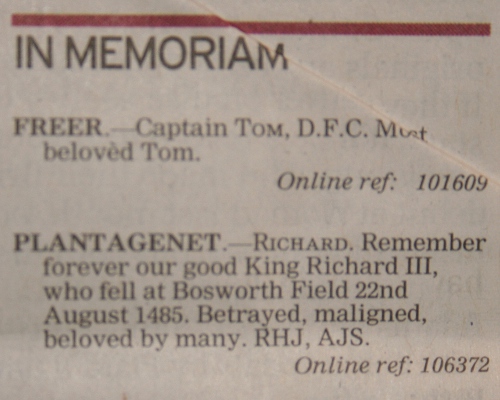 The Telegraph’s website has some of the older Memoriam notices as well.