Once a year, a fleet of old London buses are allowed into military lands to take trips to an empty village where no one lives. It is of course, therefore hugely popular.

This is the bus route though the middle of the Salisbury Plain to the abandon village of Imber – the ImberBus.

There are only a few days each year on which the road to Imber is open to the public and so this year the Imberbus service will operate on: Saturday 15th August 2020.

You can look at it as a chance to ride on buses to an abandoned village, but that is almost to belittle the totality of the day out – riding through an empty landscape where trees have replaced tower blocks, where burnt out tanks are more common than Uber taxis, where a church in the middle of nowhere will serve you a cup of tea.

There will be around 20 London Transport Routemaster buses (including a few new ones) providing a bus service from Warminster Station to Imber and onward to other isolated locations on the Salisbury Plain with some of the weirdest bus stop names you will ever see.

This year is also slightly different, as the military usually let private motor vehicles drive around as well, but this year, only buses will be allowed into Salisbury Plain. You could say that it’ll be the first to have a car free day in a place no-one lives!

As the buses will be operating an ordinary bus service, there is no need for passengers to book in advance – just turn up and pay the conductor on the bus.

To get there, take a train from Waterloo to Warminster, and split the ticket at Salisbury as that’s often a lot cheaper than buying a direct ticket. 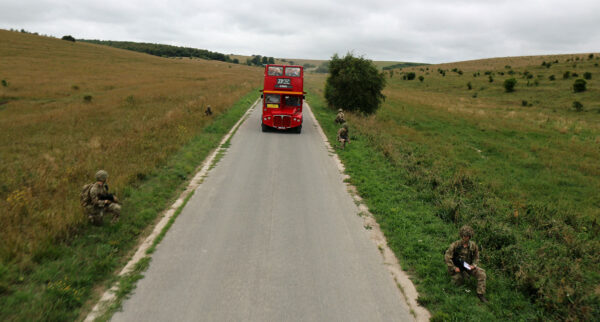 However you choose to get there, if you fancy a fine day out in the countryside, to visit an abandoned village, and do so in a fleet of London buses, then put the 15th August in your diary.