A recently rediscovered 20 foot long panorama of Westminster from 1815, showing the old Parliament building is up for sale this week.

Prévost’s London panorama was part of a huge craze for such proto-cinematic images, which blossomed in the late 18th and early 19th-centuries.

The 20-foot panorama, made from the top of St Margaret’s Church just outside Westminster Abbey, is itself just a preparatory study for a 100-foot long version that was later exhibited in Paris.

The final, and since lost panorama would have been shown mounted on a circular frame and people would have walked into the centre to admire the view, as if they were themselves standing on top of the church as the artist had.

The leftmost part of Prévost’s panoramic vista shows Chelsea in the distance, with Hyde Park further to the right. In the foreground are various shops on Princes Street. There was even light industry: one large building is prominently signed ‘Emery Glass Paper Manufacturers.’

Further back is the building that would later become Buckingham Palace. In 1826, only a few years after Prévost completed this panorama, King George IV employed the architect John Nash to expand the house into a palace.

The foreground of this detail of the panorama is occupied by the Middlesex Guildhall, which was replaced by one of the last of the great gothic revival buildings of the 19th century, a building which is today the Supreme Court.

Looking north, Banqueting House stands out above the then lower Whitehall offices, and St. Martin-in-the-Fields in the distance. 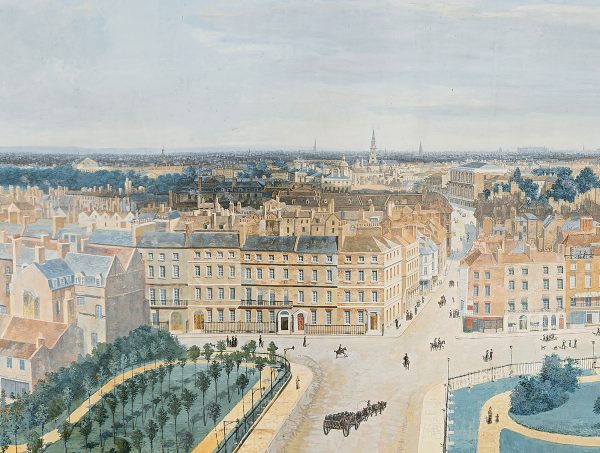 The Thames carves around, and in the distance, the shadowy bulk of St Paul’s Cathedral dominates the skyline. 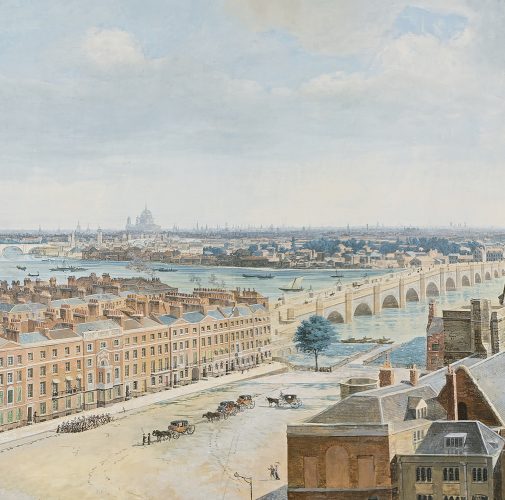 However, the sight that will probably cause the most excitement is the old Parliament, which was largely destroyed in 1834. We’re so used to the gothic design of the Parliament building looking as if has stood since the Normans arrived, that it can be a shock to remember that it’s less than 200 years old, and replaced a very ramshackle set of buildings before it. 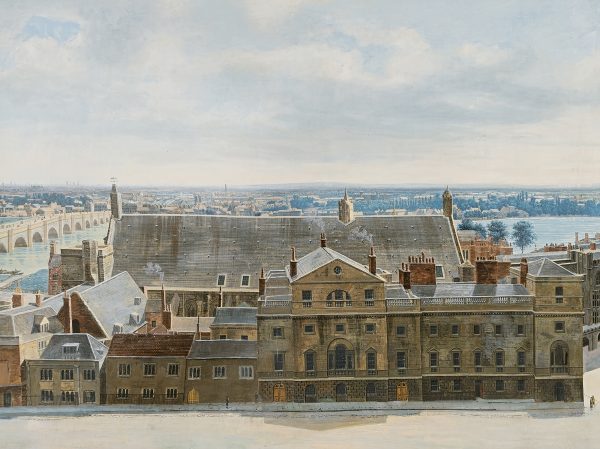 The medieval appearance of the heart of London must have been of considerable shock to Parisians, more used to the grand boulevards and impressive buildings that fill the centre of their city.

At 20 foot long, it would look good in a museum.