Unbuilt London: The railway in the middle of the Thames

Imagine if you will, a city straining to cope with a growing population and a transport network barely able to keep up. Lots of plans are submitted for new railway schemes to deal with the bottleneck, but all have one major downside — the destruction of vast swathes of housing and factories.

What is needed is somewhere already devoid of troublesome occupants and that could offer a convenient and speedy route across the Capital.

And 160 years ago, such a plan was offered to the Victorian Parliament to consider.

What a lot of people had overlooked was the River Thames, for while it was a major pedestrian traffic route for boats — vastly more important then than it is today, it was not considered suitable for anything else.

But what was to be known as the Thames Viaduct Railway proposed building a mighty railway running right along its length. It would have linked London Bridge to Westminster and had a number of stops along the route conveying passengers to convenient locations in the City. 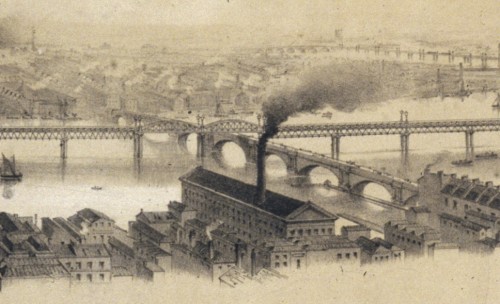 It was expected that the railway would be able to replace a 20-40 minute boat trip with a 10-minute train trip.

You might have noticed that there isn’t a huge railway line running through the middle of the Thames today, and there never was in the past. But the idea was certainly considered, and at considerable length.

The recent — at the time at least — development of several new bridges across the river had impeded some of the heavy cargo traffic that used to come much further up the Thames at the time, so it was felt that a lengthwise viaduct would not be a significant problem for cargo either.

The concerns about the aesthetic impact of such a huge construction were dismissed as the Thames at the time was hardly that impressive a sight anyway — with the shores lined with warehouses and cargo, and the river itself being hardly the most sanitary of water courses.

In terms of appearance, its counterpart can be found in the modern-day Hungerford Bridge, which the report into the Viaduct Railway cites as the likely model for its own service. It would however have been at least twice as high, as it had to pass over the existing rail and road bridges that crossed the river.

In that sense, its height alone would have made it a massive and overwhelming structure along the river. Nonetheless, the promoters said that the obstructions in the river caused by two cast-iron columns of 8 feet diameter, and set 24 feet apart was “insignificant compared with the important results obtained”.

Evidently, the proposals got some support from investors as a company was formed — known as the London and Westminster Thames Viaduct Railway.

A notice was published in the official London Gazette[3] on the 23rd November 1852 announcing that the project would be presented to Parliament in the 1853 session for approval.

A private bill[4] was duly proposed in Parliament[1] for a railway of one mile and 72 chains in length between London Bridge and Westminster Bridge.

However, quite what happened after that is unclear, other than quite obviously it failed to secure the necessary backing, financial or political. The firm itself was dissolved by 1860[2].

The concept though did not — it just moved a few tens of metres to the North and some 15 years later, Parliament approved plans for the District Railway to build an underground service running from Westminster to Mansion House in the City as part of the new Thames Embankment works.

Today it’s the Circle/District Line built in tunnels laid next to the river — but it very nearly could have been built in the middle of the river instead.

The view from the carriages today would certainly be a lot nicer.

[1] Reports of Board of Trade on Railway and Canal Bills, and Bills relating to Harbours, Docks and Tidal Waters, 1864