In 1855, a plan was submitted to Parliament for what could have been the first Underground railway under London – with a route that would have pre-dated the eventual Central and Picadilly Lines by some 50 years.

The London Railway Arcade was a sub-surface railway proposed by Mr Hawkshaw and was in fact two separate lines at the western side of Central London which then converged into a single railway line running towards the City.

One line would have started at Cumberland gate (now Marble Arch) and run along the length of Oxford Street to Tottenham Court Road, where it drove southwards to the junction of Endell Street and Bow Street (a short walk from Covent Garden tube station).

The other line would run from Albert gate (now Hyde Park corner), and followed the Picadilly Line route up to Covent Garden, then carry along Long Acre to the junction mentioned above.

There, the two lines were to converge and run as one line to Cheapside – ending roughly where St Paul’s tube station is today. 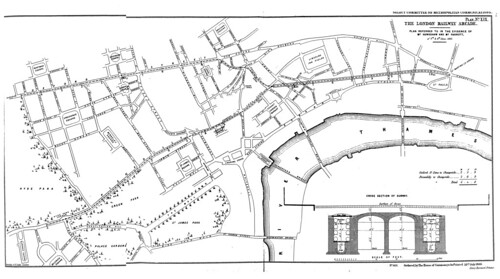 In his submission, Mr Hawkshaw estimated that the sub-surface line would cost £3.26 million to build, less £958,419 the value of buildings reclaimed, and would earn a profit of 10 percent.

In order to boost revenues and improve the streets, the construction of the railway also included the provision of space in side rooms for gas, water and sewage pipes. This was not that uncommon as it happens, and a good many Victorian street “improvement” plans include these smaller tunnels next to larger facilities when needed.

For reasons which are not clear, the Parliamentary Committee investigating transport improvements in London declined the proposal, but did approve plans for an underground railway between Paddington and Farringdon. The world’s first underground railway opened on the 10th January 1863. Next year is its 150th anniversary.

If the London Railway Arcade had been approved though – we might have been celebrating the 150th anniversary of the worlds first underground railway about five years ago – on line running under the West End of London.

Such are the quirks of history.