How TfL is planning for the Olympics traffic deluge

Later this summer, the transport will/won’t be thrown into chaos as unlimited hordes of people visit the city during the London Olympics, and it is interesting to ponder how we will all cope with the dramatic changes.

There has been a lot of reporting in the media about what sort of impact the Olympics will have on the transport network, some of it accurate, and some rather more doom-laden predications from some quarters.

A couple of weeks ago, a few writers were invited in to hear TfL’s side of the story.

One of the more unusual aspects of London 2012 is that the sporting events are taking place in London. No, that is actually unusual – as most host cities tend to put the Olympics on the edge of town, but London has major events in Westminster and Wembley – not to mention the Stratford megalopolis, which itself is fairly close to the edge of the City of London.

Despite that, TfL expects that 70% of the roads and 65% of the tube stations will be unaffected by the Olympics. However, the remaining network is undeniably going to be stressed as it has never been before.

The big issue is not just the sheer crowd sizes, but also what if (or should that be, when?) something goes wrong. As it happens, London is actually quite lucky in this regard, as most of the venues have alternative escape routes. Stratford especially is well provisioned with multiple different rail services.

A 136 page PowerPoint presentation went through the issues – and I must confess that I do find town planning and the sort of strategic thinking that goes into big events to be quite fascinating, especially as the data can throw up surprising facts.

Any failures on the tube will almost certainly be the major headline event of the Olympics in terms of transport – simply because it transports so many people so quickly, and vast crowds outside tube stations will always be more photogenic than a small crowd waiting for a late bus.

As I presume most of us are aware now, all engineering works will be suspended during the Olympics. That will in fact cause a bit of a backlog of routine work after the Olympics, but fear not, they don’t plan to have a big splurge of track closures the minute the athletes have gone home.

If nothing else, the tube staff are going to be tired from the extra effort that might be needed at times to cope with the crowds, and could do with a bit of a break. So Londoners are likely to see a slight breather as well in large scale engineering works after the Olympics.

Obviously, there are tales of woe about the reliability of the tube, and myself living along the Jubilee line have had to put up with years of disruption as signalling upgrades are carried out.

Surprisingly though, reliability is improving (click on images for larger versions). 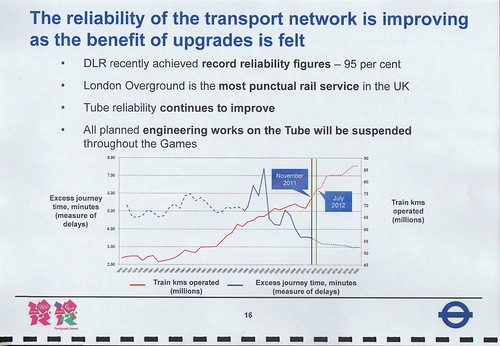 The Jubilee line which is likely to carry most of the regular traffic will be running with 30 trains per hour by the Olympics – up from 27 at the moment – and they expect to hit 32 trains per hour at times.

You may have seen scary looking charts that show the impact the Olympics will have on individual stations – and the impact that hoped for mitigation techniques will have. 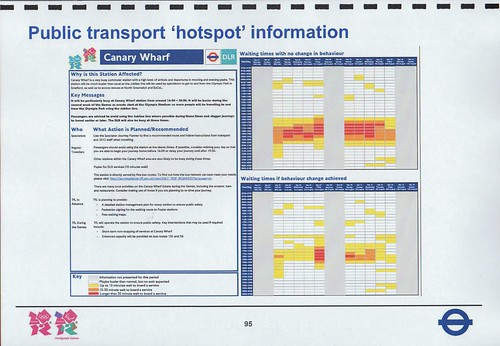 The biggest transformation seems likely at Canary Wharf. From TfL’s perspective, it has been a lot easier to deal with the big firms in docklands as they have dedicated “business continuity managers” who are dedicated to keeping their companies running during bad times.

The biggest headache it seems would be the smaller firms where Olympic planning is another task for an already busy manager to cope with.

This is an area where it is the employees who can probably apply the greatest pressure on the boss to think about the issue – as it is they who will be setting the alarm half an hour earlier in the morning to get to work on time, if the boss doesn’t find a way of enabling flexible working or working from home a bit during the Olympics.

I bet though that we’ll still have firms waking up the Monday after the opening ceremony and wondering why no one told them the city might be a bit busier!

Then again, one piece of widely reported advice to cope with the additional crowds in some places was for Londoners to go to the pub for a pint while waiting for the crowds to dissipate. 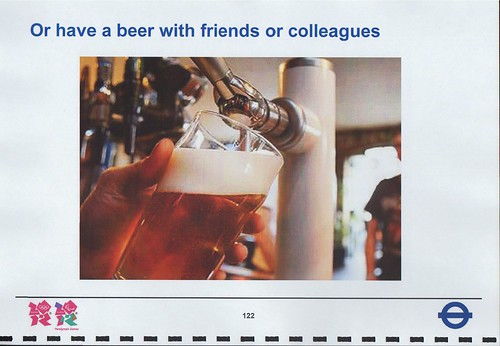 Oh, and in summary – avoid Bank. And no, you can’t sneak in via Monument!

I am no expert on roads, other than to walk beside them as a pedestrian, so the impacts here are something I can’t really quantify.

The Olympic Route Network (ORN) is the most controversial aspect of the plans, although our briefing was at pains to dispel some of the myths about the facility.

Certainly, the lines will be primarily used by people working in the Olympics (and competing) and only if capacity is available, would it be used by sponsors and IOC members. From the perspective of the people involved in the Olympics, the ORN is not there to speed their people past fuming Londoners.

Apparently, previous Olympics have had problems with officials being delayed between venues, so since Sydney, cities are required to guarantee transport reliability. That is why the ORN exists – to get officials there on time, not get them there faster.

The notorious “Games Lanes” that will be exclusive to the Olympics users will comprise 0.3% of London’s roads – albeit rather important ones. There will also be a range of variable road signs so when the ORN isn’t needed, then it can be reopened to the general public.

However, there is no denying that it will be a segregated lane, and unauthorised users will be fined – probably heavily. Unavoidable usage – such as broken down vehicles are likely to be looked at sympathetically, but nothing is being set in stone.

TfL’s perspective is that if fines are handed out then something went wrong with how they told people to avoid the lanes.

There is also the topic of utilities. A company wanting to dig up part of the ORN to lay fibreoptic cables isn’t going to get far. However, if a water mains bursts, then – depending on the size of the problem – they will be allowed in to do repairs. There may however be times when a utility is cut off until the ORN is less busy.

I look forward to the first “Family nearly dies of dehydration after water cut off for 30 minutes by Olympics” headline in a suitable tabloid newspaper. 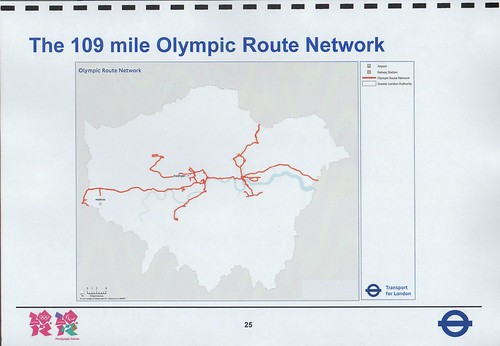 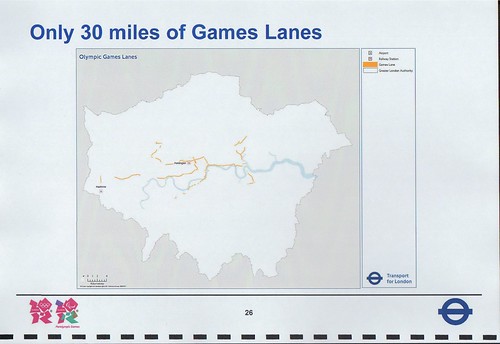 Local residents around Olympic venues will also be affected, with parking controls coming into force at times. To be honest, most of the maps they showed us were confusing, even to this map geek, but they assured us that simpler more user friendly maps will be produced closer to the date. 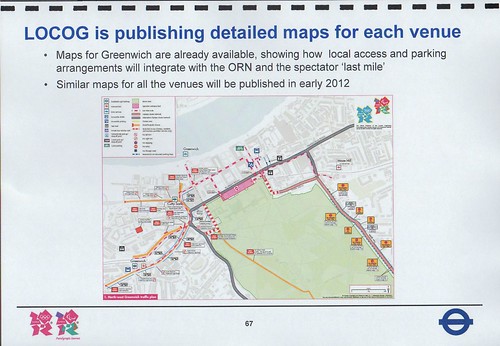 Some quite fascinating heat maps exist that predict on a day by day basis where they expect the worst road traffic hotspots to crop up as different events take place around London.

Of course, the bulk of London’s road traffic is actually tradesmen carrying out their daily duties. There have been tests in various locations encouraging deliveries away from the peak hours – some of which have worked. Part of the legacy could be a shift in how deliveries are made, and what time of day they are carried out. No one really wants to be woken up at 3am by a delivery lorry, but it can’t be denied that roads are empty at that time of day.

TfL is providing delivery firms with postcode based data that can be plugged into logistics databases. It’ll be interesting to see what happens if I log into my online shopping service and try to book a delivery of food right in the middle of the busiest time. Will they flag that up on the website as a very bad idea?

Obviously, I am communicating what I learned at the briefing, but in a non-specific manner. TfL is setting up websites and journey planners to offer more specific advice.

You may have already seen the amusing awareness posters on the underground starting to build up awareness. 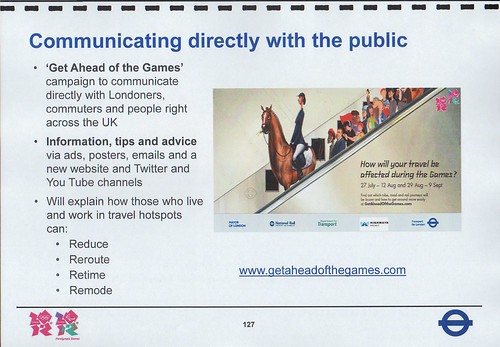 A lot of effort is also going into improving on-the-spot communications by the transport staff. Getting information from the central control stations, and then getting the staff to pass that on to the customers.

A rather swish communications control centre has been set up in an office in Southwark. A dedicated team will have access to TfL’s own transport information, but will also have log-ins to the systems managed by national rail and other transport organisations so they can have a better view of alternatives when (I mean, if) things go wrong.

I am personally dubious about that last link in the chain. Too often I have passed through tube stations that I know don’t have interchanges with other lines at weekends, and the train driver doesn’t tell the passengers.

Maybe improved communications will be another good legacy to look forward to?

The control room is a whole floor, although we were told not to point cameras to the left of the floor, as that is where the police sit. They really don’t like cameras being pointed at their computer screens. 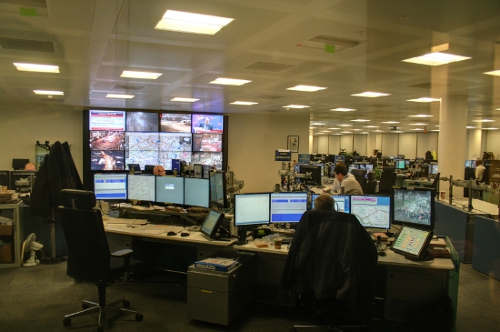 Overall, it looks like a lot of thinking has gone into working out where and when things will be bad – the question will be whether the publicity encouraging people to rethink their travel plans at the worst spots will have the desired effect.

And then, I’ll be interested to see how many of those changes can be carried on after the Olympics, leaving us with a long lasting legacy in the form of flexible hours and more home working to reduce the crush on the normal daily commute.