How steam trains drove Victorians to acts of madness

The newly invented steam train, traveling so fast and far were blamed for triggering dark desires in men, driving them to insane acts of violence.

The rocking motion of the trains, and their incredible speed through the countryside was suspected for an outbreak of “railway madmen” attacking fellow passengers, and as with all new technologies, it was the technology to blame.

Just as the radio was thought to encourage indolence, the television was blamed on domestic strife, to modern day obsessions about social media polluting our minds, we have always tried to link two disparate elements — a new technology and a bad event — as somehow linked.

It’s not though that they weren’t without examples to fall back on though. It’s worth noting that this was also the era of small carriages with compartments rather than the long open plan carriages we have today. Once the train left the station, there would be no way of leaving your compartment to escape the terror of the madman.

So the Victorians decided that steam trains were bad. Very Bad.

Some blamed the very notion of modernity itself as a cause of railway hysterias, with Victorian explorers returning from exotic lands and claiming the insanity seemed less prevalent in the less developed worlds.

As Henry Maudsley explained in 1867, the “theoretical considerations would lead to the expectation of an increase liability to mental disorder with an increase in the complexity of the mental organisation.”

Was there a limit to how much the human brain could cope with, and were the railways a leap too far, and was the technical marvel of the railway likely to cause insanity in the overloaded minds of Victorian gentlemen?

The fear of railway insanity was not assisted by the use of the small carriages being used by railways — who essentially took the horse drawn stage coach and put it in a train behind a locomotive. Confining people in fast moving carriages without escape could in itself cause panic among those unused to the railway.

In 1845, the satirical magazine, Punch suggested a Railway Lunatic Asylum would be needed to deal with the growing numbers of reports of insanity on the railways. 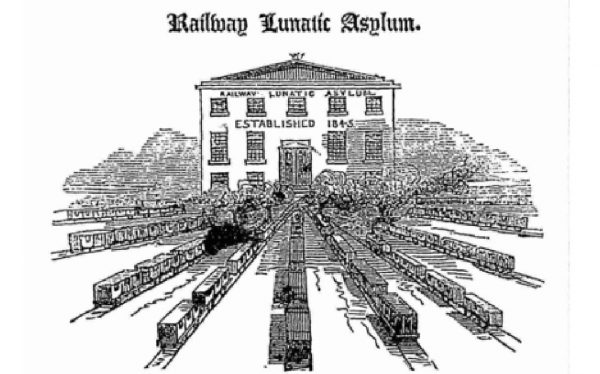 An American (of course!) wrote to The Times in 1854 saying that he would never travel in an English railway withouth a loaded revolver for fear of what madman he might be confined with.

There was even a new medical condition invented – the Railway Spine, which was a form of paralysis which is today known as a type of pre-cursor to post-traumatic stress disorder, and triggered by a repressed terror of the railway accident.

People involved in railway accidents who showed no outward physical harm were somehow paralyzed, either by fear of the accident, or in some cases, it was suspected, in an attempt to claim compensation from the railway company.

As one doctor wrote: “Railway collisions, their sudden occurrence, the dramatic setting, association of large numbers of the injured, the social prominance of many victims, the wide publication of newspaper reports, and the ground importance of the financial claim created a lurid mental picture in the mind of the injured and indirectly affected the general public in such as way as to provide a fertile soil for nervous disturbance”.

Even the famous learned sort were afflicted. Charles Dickens famously struggled to travel by train after being involved in a railway accident in Staplehurst in 1865.

A couple of years after the accident, his children watched their father travel by train and noted how “as soon as it went across the points he would grab hold of the chair and look straight at the floor. He would sweat and tremble”.

Some of the shame that people felt from the terrors of the railway were put down to a lack of masculinity, in that railways caused men to suffer the sorts of hysterias that were the purview of women, not men. The railways challenged Victorian ideas of the man and masculinity, heightening the fears that some men had of the railways.

In this aspect, it was men who were afraid of becoming transformed in railway madmen, and losing control over their actions. The trains introduced a random Jekyll and Hyde into locked carriages where railway motions replaced chemical potions.

That said, one traveller who was involved in an accident joked that it the upset had been so great as to cause the unexpected benefit of curing his rheumatic fever, and asked to be kept anonymous in case the railway company asked for compensation for his medical cure.

The problems of passengers not really understanding the strange new world of the railways was recorded in Dr Dionysius Lardner’s Railway Economy, which reminded passengers not to yield to the sudden impulse to spring from the carriage to recover your hat which had blown off, or a parcel dropped.

Unfortunately, the cure for such foolishness was to lock the carriages, which did little to assuage the fears of travellers of being attacked by the railway madmen.

August 1864 saw a report of a sailor and his wife catching a train from London to Peterborough, who, as soon as the train departed was overcome with a fearful madness and started accusing fellow passengers of robbing him and trying to climb out of the window to escape the train.

Although described as a railway madman, the report did accept that the sailor was possibly suffering from Delirum Tremens, a rapid onset of confusion usually caused by withdrawal from alcohol.

Concerns about people travelling in isolated carriages without escape from the risk of being assailed by a gentleman suddenly driven mad resulted in politicians calling for some form of communication being introduced between passengers and train guards.

Lurid reports in the press did nothing to dampen down fears of being caught in a locked train carriage with a madman and no hope of escape. 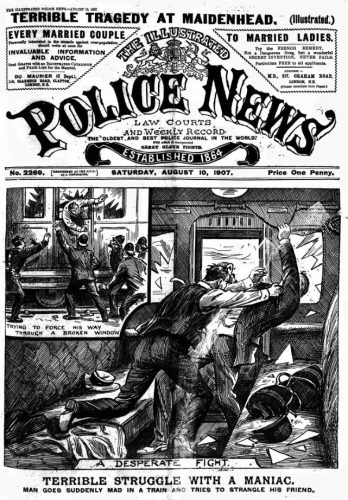 Americans wrote about the peculiar English habit of “locking people up in a small box”, at a time when American train carriages were longer than UK versions — indeed, the longer carriages we have in the UK today were an American import thanks to the London Underground.

There were tales of people climbing out of their small compartments and being able to edge their way along the narrow ledge outside to the next compartment — which considering how fast the trains were running is no mean feat of sheer bravery. 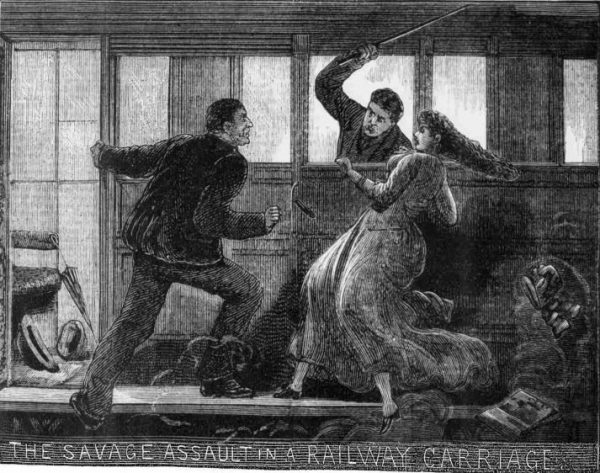 It was claimed that the railway owners were apathetic to the dangers and there were calls for them to be held responsible for attacks. In 1864, the government introduced rules offering compensation for railway accidents, although the railways, fearing an outbreak of fake claims, tried to limit payments to £100.

It’s not as if the railways didn’t have rules covering insanity and drunkenness on the trains though. Persons where were thought to be insane or disorderly were to be confined into separate compartments from other passengers until the next station.

The introduction of the alarm chain to warn guards of a problem wasn’t without untended side-effect though.

There was the story of a child repeatedly pulling the cord while in a toilet, and when the door was forced open, the guard was faced with a distraught child trying to work out why pulling the toilet chain wouldn’t flush the loo.

Others pulled the chain to control the gas lighting, or the heating. One lady decided that pulling the chain would stop the train so she could take a closer look at a nice house for rent they had just passed.

Of course over the years, people became more used to the strange world of the railway carriage, and with familiarity came reassurance, and the fears of the madmen of the railways faded away like a bad dream.

Now the greatest terror that seems to afflict the modern railway passenger is to be sitting in a nearly empty carriage, only for a chatty person to sit next to them.