How Crossrail is using 3D-printing to build its stations

When you start to use the new Elizabeth line stations, among its many achievements will be the first large scale use of 3D-printing in concrete.

The use of 3D printing has made possible one of the more distinctive features of the future Elizabeth line stations — the curved concrete panels that will line the inside of the passenger tunnels and some stations, and sinuously glide around corners in a way never seen before in a tube station. 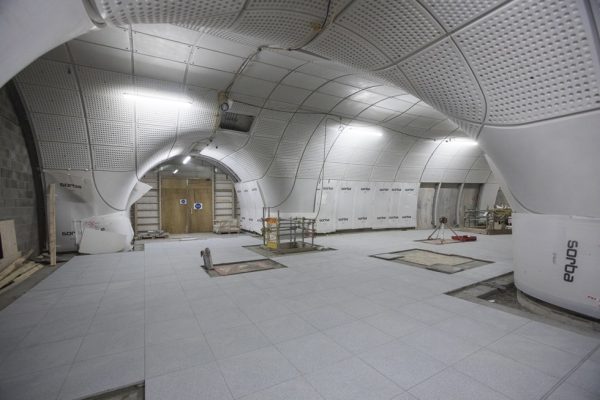 Although it has been technically possible to use concrete as a material in 3D printing for a few years, the objects made tend to be small as larger panels of the size needed for Crossrail still have structural weaknesses in the design caused by the weak bonds between each layer as they are built-up by the 3D-printer.

What the Crossrail contractor fitting out the stations did was take a very different approach, they printed the moulds instead of the concrete.

Building moulds to form concrete is a well-known technique, but it’s very time consuming and wasteful. The traditional method is to carve the shape out of a solid block, then cover the rough surface with a tooling paste to create a smooth surface.

Not only wasteful in throwing away material that’s not needed, but the tooling paste also takes on average 12 hours to set. Each traditional mould would take around 16 hours to make, and that’s before you’ve even started with the concrete.

For a project as large as Crossrail, which needs around 36,000 concrete panels, this was far too slow, too expensive, and too risky in terms of things going wrong. An alternative was needed, and 3D-printing came to the rescue. 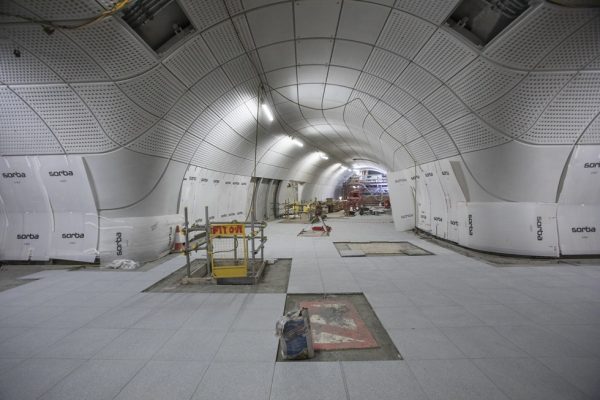 An Australian company, FreeFab, which happens to be a subsidiary of the tube stations fit-out contractor, Laing O’Rourke has perfected a method of printing curved wax moulds that can then be used to form Crossrail’s unique station panels.

It wasn’t simple though, it took three years of experiments by James Gardiner, the Australian architect who invented the technique to find a wax that would be suitable for use in concrete moulds. Something soft enough to be used in a printer and with a melting temperature to make it flow easily, but also hard enough to withstand the weight and the warmth that comes from curing concrete.

FreeFAB uses a 6-axis gantry robot with interchangeable end effector tooling to coarsely 3D print a wax-based mould, then and subsequently polish the moulds by removing the rough surface with robot milling tools – a combination of additive and subtractive manufacturing to create a large complex and smooth surface for the concrete.

The huge advantage of 3D printing the moulds is that prototypes can be made more quickly — typically 2.5 hours versus 16 hours — and is a marked change from the plywood models used just a few years ago on Crossrail’s original test mock-up.

In production, each panel mould is 3D printed from a red wax, and then concrete is poured in as would normally be done in conventional moulds. Once the concrete has hardened, the wax can be simply melted off, and most of it reused for the next panel.

Although they’re using 3D printing to make the moulds, the casting process for the concrete itself is tried and tested, so there’s no risk that the panels would have any unforeseen weaknesses later on.

The use of 3D printing also means that the laborious and expensive process of making up each of those separate moulds can be avoided.

The panels are being manufactured by the Laing O’Rourke subsidiary, GRCUK who are using the FeeeFab technology in their Doncaster factory.

When the stations open, not only will they be huge, but they will also represent the first large scale use of commercial 3D-printing in the concrete industry. 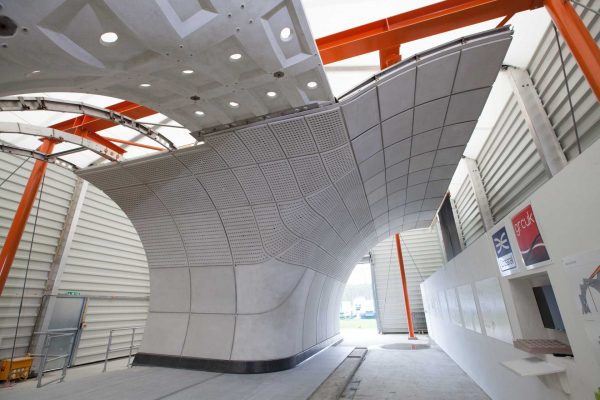