How Big Ben originally got its Nickname

With the news that the Clock Tower at the Palace of Westminster is to be renamed Elizabeth Tower, comes the usual speculation about how the huge bell within got its nickname of Big Ben.

Curiously, this is an issue that has often perplexed me as there seemed to be at least two rumours, and few facts — and a couple of weeks ago I started trawling through newspaper archives to see what I could find.

It seems sensible after all that if the Bell is to be given a name, then the press of the time would have reported the fact. It’s worth noting that while the press today writes at length about politics, they rarely report on the details of Parliamentary affairs – whereas in Victorian times it was the exact opposite.

The Houses of Parliament was largely destroyed by fire in October 1834, and reconstruction started in 1840, but the Clock Tower was not completed until 1859 – so this is the window of time through which I limited my researches.

The official name for the Bell is The Great Bell of Westminster, although an issue of the Illustrated London News of June 1858 referred to as the Bell Victoria.

The two most common explanations given for the nickname of Big Ben is that it is either named after a famous pugilist, Benjamin Caunt or the Commissioner of Works who oversaw the later part of the construction of the Palace, Sir Benjamin Hall.

Now, let us look at the boxer, Ben Caunt, who was known by the nickname of Big Ben. His main career ran from 1834 to 1841, with a couple of later matches. Despite his fame, it would be more than a decade after his retirement that the Bell would get its nickname.

Is it really likely that the fusty Victorians would name a bell in their mighty new Parliament after a mere commoner and a boxer at that? Maybe, but he wasn’t really that famous at the time.

It would be like us today renaming the Tower after Big Daddy. I also found much earlier references to boxers being called Big Ben – such as in far back as in the Derby Mercury of 1787. It is possible that Big Ben was also a commonplace nickname for large boxers and hardly warranted such an honour as having the bell named after them.

Were there any other Big Bens at the time of the Parliament being rebuilt?

Well, in fact, there were several, including a noted Jew who appeared in papers occasionally under the nickname of Big Ben (Benjamin) for being very tall.

One we can hopefully discount immediately – as Big Ben was also the name given to a machine used for the carding of wool. I found several references to bankruptcy sales where a Big Ben was offered for sale amongst the other effects.

The more curious and at the time more famous Big Ben that was around at the time of the construction of the Clock Tower was not a prizefighter, but was still a prize winner – a famous horse!

There may have been several horses of the same name or one with a lengthy career, but there is no doubt that the horse in question was famous at the time and regularly appeared in the sporting news reports.

Our current Queen is famously fond of horses, but Victoria was not – and again despite its fame, I just can’t see any part of Parliament being named after a horse. I really hoped it was though – that would have been amazing.

Sadly we come to the most likely and often cited rumour – that the bell was named after the Commissioner of Works, Sir Benjamin Hall.

Can I find any concrete evidence of that though?

In September 1856, the original Bell was still being referred to by the regional press as the Westminster Clock Bell, or variants thereof.

One aspect is that the Bell when cast carried an inscription which read: “Cast in the 20th year of the reign of Her Majesty Queen Victoria, and the year of our Lord 1856, from the design of Edmund Beckett Denison Esq., Q.C.; Sir Benjamin Hall, Baronet, M.P., Chief Commissioner of Works”.

So Ben had his name cast into the very fabric of Big Ben. Or at least he did in the original. It broke, and was recast two years later in 1858 after the original broke.

In August 1856, the Bell was cast in the village of Norton, and was reported by the Westmorland Gazette as the Great Bell. No mention of any other nickname in the article.

The Hertford Mercury of 25th October 1856 noted the arrival at Westminster of the Bell and commented without citing the source that it was to be called Big Ben in honour of Sir Benjamin Hall.

Likewise, the Wells Journal of the same day commented of the nickname and wondered if the bell would rival that of “Old Tom” in Lincoln. Nicknames for bells seemingly popular.

In the Belfast News of 7th Nov 1856 they noted that the “Parliamentary Bell is already christened ‘Big Ben’.” They also noted that the clapper is unnamed and cheekily suggested calling it Gladstone as “without a doubt, his is the loudest tongue in Parliament!”.

The Bucks Herald of 8th Nov 1856 also used the term “Big Ben” when writing about the construction of the tongue – which incidentally was supplied they note by Mr George Hopper of the Houghton-le-Spring Ironworks in Durham.

A hint of the origin, however, comes in the Carlisle Journal of 21st November 1856, which wrote that “Big Ben is the name which has been given by The Times (and generally adopted in London) to the great bell for the clock tower at the Houses of Parliament at Westminster”.

The paper added in confirmation that the “name being given in honour of Sir Benjamin Hall, the Chief Commissioner of Public Works, under whose official rule the monster has been brought into existence.”

Over to The Times then…

Well, I can find an article dated 22nd October 1856 headlined “Big Ben of Westminster” and describing the arrival of the bell at the building site.

However, in the article is possibly the sentence we want. As they wrote: “All bells, we believe, are christened before they begin to toll, and on this occasion, it is proposed to call our king of bells “Big Ben” in honour of Sir Benjamin Hall, the President of the Board of Works, during whose tenure of office it was cast”.

The paper makes no mention of why it suggested that, but the tone of the article and coming from the — at the time — Paper of Record, its views were considered to be authoritative to the point of issuing commands to society.

There is the tale that the nickname was proposed after Sir Ben have a particularly lengthy speech about the name for the bell, but as the Bell was already named officially as the Great Bell, and Big Ben is a nickname, this to my mind seems an unlikely story. There is also no record in Hansard of the speech anyway.

So we come back to The Times, and in the absence of any other supporting evidence, I am content to state with some certainty that the nickname is not related to the pugilist, but is most certainly given after Sir Benjamin Hall. 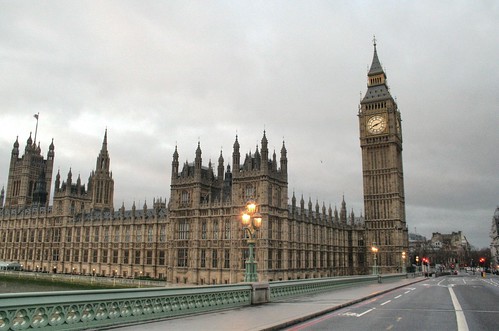 As a final note – any British citizen can ask for a tour of the Elizabeth Tower and stand next to Big Ben when it chimes the hours. Quite a remarkable experience if you’ve never done it. Details here.