If you’ve ever noticed an odd smell in the DLR at Bank station would it perhaps surprise you to learn that the deep tunnels are ventilated through an old toilet?

Fortunately, the toilet has long since vanished, although a rather curious smell still lingers, especially in the passages leading towards the circle line.

But back to the loos…

At Bank station there are the two platforms — trains come in one, drive off to a short tunnel, then reverse back down to the other platform and back out.

But, that tunnel is not entirely a dead end.

In fact, it kinks around a very sharp corner. 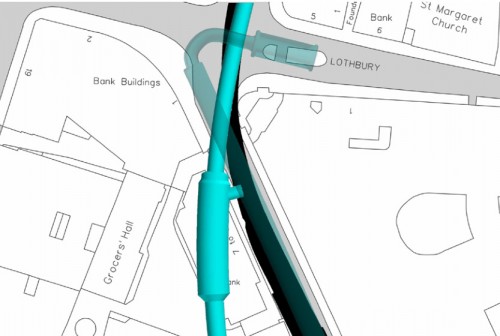 And yes, because you’ll want a bigger copy of where that map came from — pdf file.

Anyway, now that your tube geek-map desires are sated, read on.

That tunnel having made a sharp corner, runs straight up to the surface and there it emerges in the middle of the road as a metal grill surrounded by railings.

Hidden in plain sight, barely noticed, a large ventilation shaft that thousands of people walk past every day. 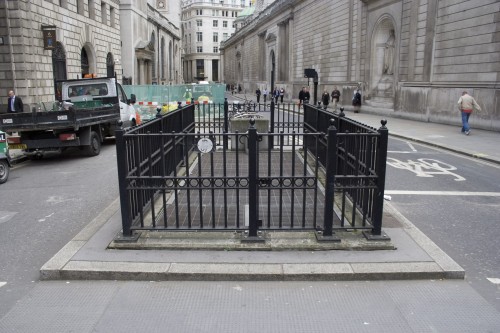 …and curiously, that used to be an underground public lavatory.

You can just about see the men’s toilets on the edge of this photo from 1970.

Then in 1991, along came the DLR, opening its new station at Bank and needing some level of fresh air to be vented down into the tunnels. Hurrah for not turning the toilets into a wine bar, for now, that site could be reused, which probably saved them a fortune in not having to buy up a building nearby for the ventilation shaft.

However, what might interest you to learn is that shouldn’t be just a ventilation shaft, but an entire tube station.

No, not for the DLR as it is too close, but that exact corner junction was once the location for the authorised, but never built Lothbury tube station.

The Great Northern & City Railway (GN&CR) which is today’s Northern City Line terminates its services at Moorgate station, but in 1902 secured permission to extend that tunnel from Moorgate to Lothbury.

Construction started but was abandoned shortly afterwards, and despite a few desultory attempts to renew the project, it was never restarted. In 1913, they even applied to extend the tunnel to Lothbury, and then on to Bank as well, but couldn’t raise the necessary money.

The tunnelling shield is still in place at the end of the tunnel where they stopped work back in 1903.

So instead of a tube station, we have a ventilation shaft, for the DLR, built inside an old men’s toilet.