Published 24 May 2011 by Churches, photography

Just up the road from where I live is St Anne’s Limehouse, a Hawksmoor Anglican Church that was consecrated in 1730, one of the twelve churches built through the 1711 Act of Parliament.

The Church is significant for several reasons, not least because it boasts the highest church clock in the City.

However, for the purposes of my blog post, the distinguishing feature is that the 60 metre high tower is still a Trinity House Mark for identifying shipping lanes on the Thames – and therefore it flies the Royal Navy’s White Ensign from the top of the tower instead of the more usual flags that Churches might choose to fly at times. 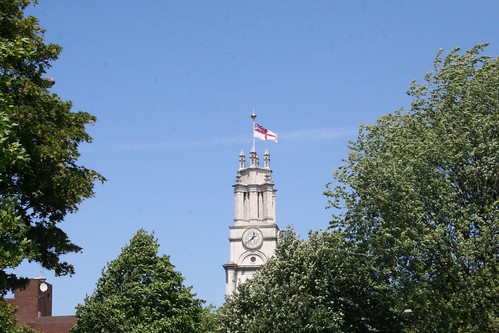 The reason this is significant is that last week a lot of very distinguished people visited the Church to hand over the red Battle Ensign that flew on HMS Ark Royal during war.

According to the Royal Navy, there are two specially designed exhibition cabinets within the Church – one contains the pre-1801 battle-sized White Ensign of the Royal Navy.

The other cabinet though, now contains HMS Ark Royal’s 18 by 9 foot Battle Ensign, the cap of a rating with the Ark Royal cap tally, pictures and brief histories of all five ships that have born the name Ark Royal and the ship’s crest.

So I went along to have a look.

Alas, despite being in a fairly busy area and very close to Canary Wharf, the church was closed at lunchtime. In fact, it seems that the church is only open for a few hours on a Sunday. 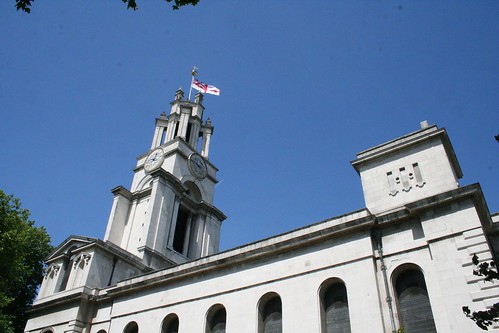 The large grounds around the church are open, but only if you can work out how to get in. Three more obvious gates were firmly padlocked closed, but the official entrance is to be found down a rather nice alleyway just off a small side street.

The gates looked at first glance to be locked, but were in fact just closed, and very reluctantly yielded to a strong push to let me squeeze through. 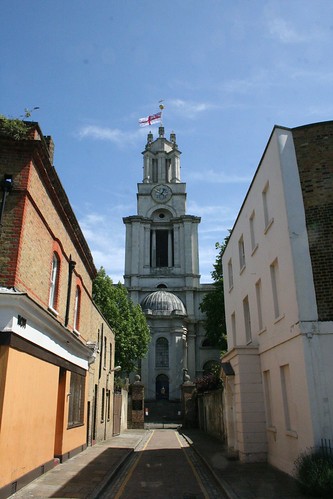 Sadly, suspicions confirmed as the doors to the Church were all locked so I didn’t get to see the Battle Ensign within.

Considering its proximity to Canary Wharf and the large number of Americans working there in need of a dose of guilt, I would have thought the church would be welcoming visitors, but it is very closed – and despite claiming the grounds are open to the public, the difficulty in getting inside suggests they are open to meet a technical requirement rather than to be welcoming to the public.

I was the only person who penetrated their gated portal when I went, despite the main road to the North being quite busy.

I know churches aren’t obliged to be open, and especially not just to satisfy curious bloggers, but this one seems to be sadly neglecting its local customer base. 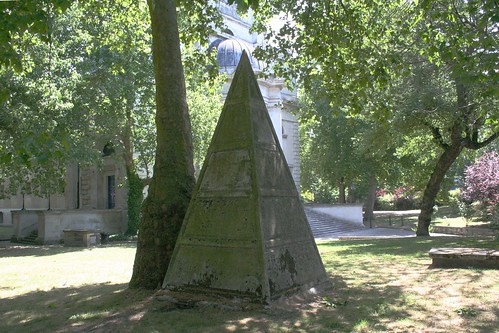 A curiosity – a pyramid. Thought to have been part of the original design to sit on top of the two square towers at the rear of the church, but never used. 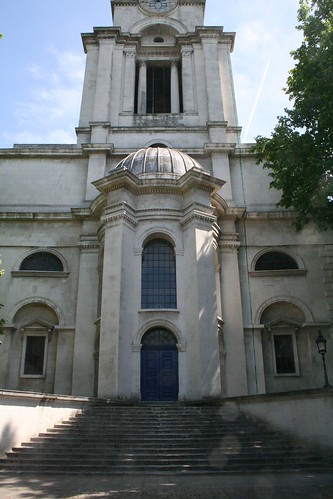