As part of the Somme anniversary programme of events London Transport Museum’s 102 year old khaki green Battle Bus No. B2737 will embark on three-day tour along the entire former front line of the Somme, in Northern France, from Monday 27 June to Wednesday 29 June.

The tour will end at Thiepval for the Evening Vigil on 30 June 2016 and the bus will be on display at Albert-Picardie Airport and Albert railway station on 1 July 2016.

The tour will pay tribute to the London transport workers that served during the war effort. The Battle Bus will journey from Gommecourt in the north to Maricourt in the south, where the British Expeditionary Force attacked the Germans alongside the French in July 1916. 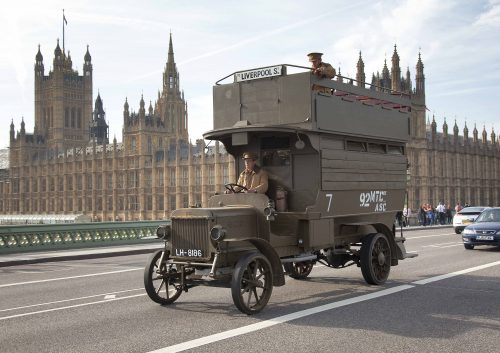 One of the only two operational 1914 B-types buses in the world, this ‘History on the Move’ Battle Bus tour aims to raise awareness of the role London’s buses and staff played during the First World War. London buses were used behind the front lines to transport troops and served in many of the famous battles including the Somme, Ypres and Loos.

The bus was restored as part of London Transport Museum’s First World War centenary commemorations in 2014. This historic vehicle tells the story of how one third of the London bus fleet was commandeered for the war effort at home and abroad, in many cases with their civilian drivers and mechanics.

One of four surviving B-type London buses – only two of which are operational – the Museum’s Battle Bus originally ran on route 9 which operated between Barnes and Liverpool Street and was housed in Mortlake garage in south west London. The bus was restored into operational condition and converted from a red London bus to a military troop carrier with support from the National Lottery Fund and London Transport Museum Friends.

Over one thousand London buses were requisitioned for war service. These modified vehicles were used to transport troops and also served as ambulances and mobile pigeon lofts which enabled messages to be sent from the front line back to headquarters.

Most vehicles went to France and Belgium, though some travelled as far as Greece.