A series of hitherto hidden vaults under a building next to London Bridge are being opened up as a new exhibition and display space.

The vaults lie below river level underneath Glaziers Hall, one of the City of London livery halls, which is curiously not in the City of London, but on the south side, in Southwark, in the former Hibernia wharf building.

The Worshipful Company of Glaziers is one of the City’s older livery companies, dating back to around 1328, and the moved into Hibernia Wharf in Southwark in 1977.

Hibernia Wharf has had a bit of a troubled history, having been built as riverside warehousing in around 1836, but was mostly destroyed by fire shortly afterwards. The current building is the replacement, by William Cubitt with two storeys of commercial chambers accessed from London bridge level, over a two-storey warehouse at the riverside level.

Unfortunately, the entire interior from the ground upwards was gutted in 1970, leaving just the facade, and the undercroft untouched – a technique sometimes referred to as “gut and stuff”, with replacement concrete walls inserted to replace the old interior.

The lower two floors of the building, along with the undercroft were then taken over by the Glaziers, and three fellow livery companies as their new hall. 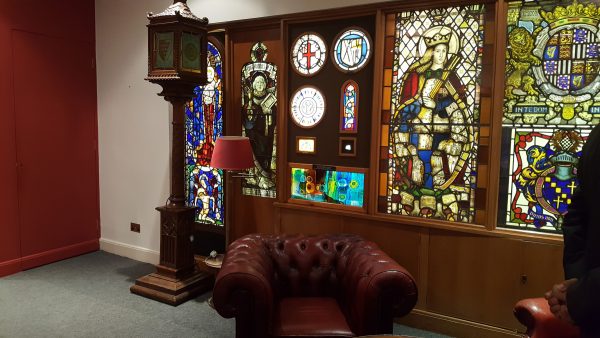 Inside, there is a curious effect of an ancient livery company sitting inside a conventionally fairly modern building, with bits of heritage dropped around, some early glazing displays and the main livery hall.

A good example of this odd mix is the Banqueting Hall, with a curiously appealing black painted concrete ceiling. 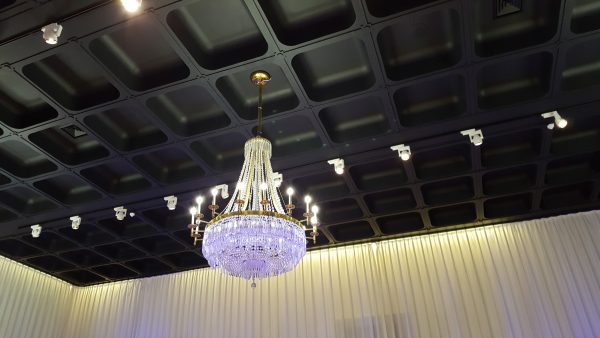 As with most City of London livery halls, they now earn their income from renting out the space for events, and that’s the impetus for the recent works to reveal the undercroft to release more space to rent out.

As part of that though, they also refurbished some of the ground floor space, removing the suspended ceiling the foyer to open up a lot more space, and fittingly for the Glaziers, a much larger glass entrance.

It was however when stripping away the plaster than covered the walls that survived the 1970s gutting that an exciting discovery was made. The wall concealed two secrets.

One is that it is a multitude of different era bricks, so the wall rather than being a single monolithic slab of brick is actually a much more decorative effect, a patchwork quilt of heritage.

There is some consideration being made to putting small signs next to each patch to indicate which decade the bricks date from. 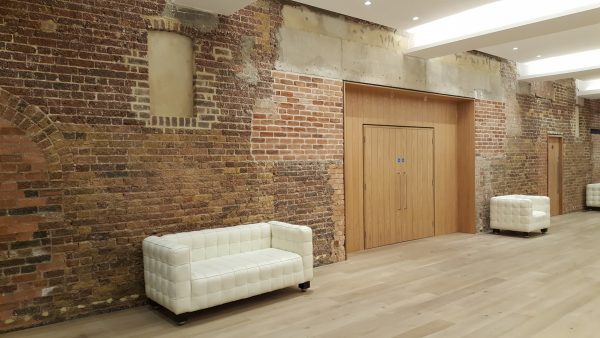 It was also then that they found right by the main entrance an unknown arch that lead down to the undercroft, and plans were changed to turn this into the new entrance. Taking advantage of an unexpected discovery and putting the new entrance “outside” the main livery hall may make it easier to open the space up without having to also open the hall as well.

Down in the undercroft, it has been until now mainly storage space, and a meeting room, all created by adding modern brickwork and plasterboard to create the effect of a modern office space.

All this modern junk has been removed to reveal the brickwork as it would have originally being designed. 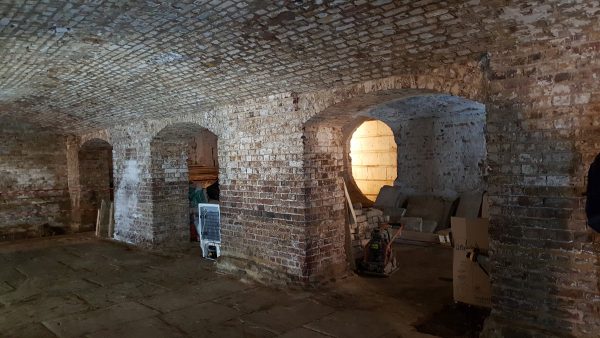 Due to the previous construction work in the undercroft, the flooring is in places original 18th-century flagstones, and others, concrete flooring.

As part of the renovations, the original flagstones from around the basement are to be moved to create a new floor in the public space, with concrete slabs used to replace the flagstones in the private areas. While this may not be a usual method of conservation, as the basement has been altered extensively, value is being placed on presenting a completeness of vaulting, with the barreled roof and flagstones.

What’s particularly exciting though is that through large “portholes”, it’s possible to see the stones of the “new” London Bridge that was constructed in 1831, and sold to America in 1967. 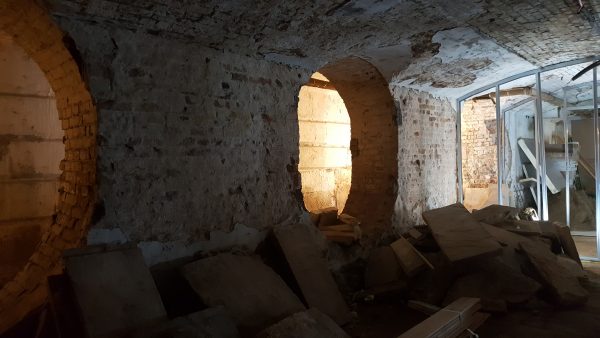 This narrow space between the brick undercroft and London Bride is to be turned into a wine cellar, with glass walls so visitors can still see the remaining stone slabs that made up the “new” London Bridge. 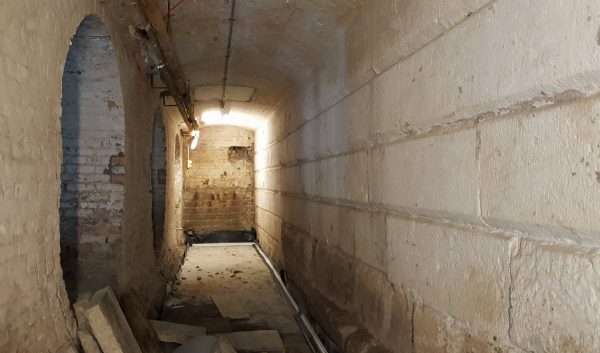 The undercroft is expected to serve as a dual space, for hiring out, but also for public exhibitions.

The main floors of the hall have been completed, as part of the £2.5 million refurbishments, and the undercroft area is expected to be finished early next year.