Hidden under a main road – the remains of Merton Priory

The construction of a moderately new main road in Colliers Wood, Sth London wiped out the remains of one piece of London history, but uncovered an even older remnant of even more importance.

The lost history is the disused, and since destroyed Merton Abbey train station – which more by fluke than anything else happened to sit right on top of the remains of Merton Priory. When one was destroyed, the other was uncovered. 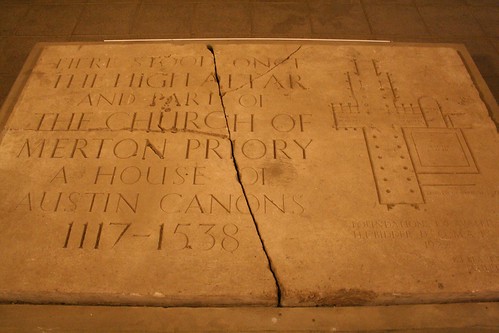 Merton Priory was established in 1117 on its current site by the sheriff of Surrey and was given the manor of Merton by Henry I in 1121. It slowly became a major religious and royal site, and place of education. Both Thomas Becket, later Archbishop of Canterbury, and Walter de Merton, founder of Merton College Oxford, were educated at Merton Priory.

It was also here that in 1235 that King Henry III signed the Statute of Merton, part of the long-running battle between the Barons and the King to limit the Monarch’s powers.

The priory was abandoned in 1538 during the Dissolution under Henry VIII. Ironically, most of the stones were taken to build the King’s Palace at NonSuch, and while the palace was later utterly destroyed, the remains of the priory still exist.

The land remained fallow for a while, but later the growth of industry along the Wandle River meant that the land was built upon, mainly by mills and fabric printers.

Later, in 1868 a train station opened at what was now, probably incorrectly called Merton Abbey, mainly to serve the workers and deliver freight, but the line closed in 1916 due to war time efficiencies. Later reopened, it was never very popular and closed permanently in 1975.

In the 1970s the land around the Priory church was acquired by Sainsburys who erected a supermarket north of the church in the 1980s. A main road was built south of the supermarket, and as part of the construction works, the remains of the Priory were excavated by the Museum of London.

While much of the remains are now buried under the car-park, the Chapter House was preserved by lifting the road up and over the remains, where they remain, in a “basement” under the road.

Occasionally, they unlock the door that lets people under the road to see the ruins.

Knowing that an open day is happening, and that the remains are under a road isn’t much help if the only sign advertising the place is in fact under the road – so locating the place was a bit of a challenge, but eventually, the subway was found and the usually locked door located. 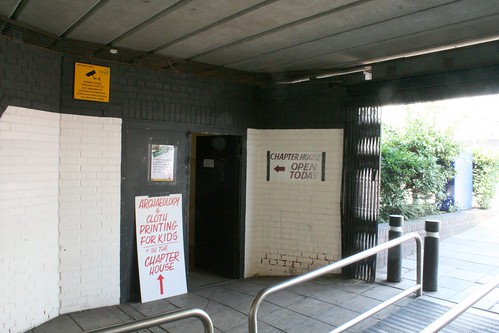 Inside is a moderately gloomy space with a low ceiling, and in the sand-filled floor, the stony outline of the Chapter House. Some signs around the place explain the history of the area, if you can read them in the gloom. 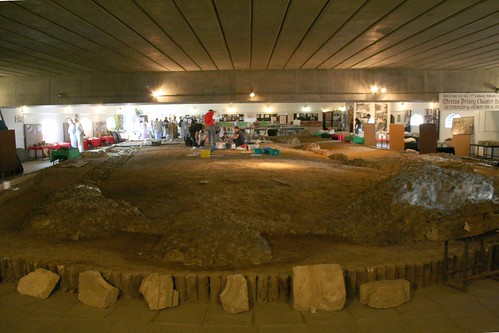 Some kids were being entertained by the “official archeologist on site” in the middle of the grounds, and aptly considering the later fabric printing industry in the area, a few local groups had taken up the chance to show off their wares.

The site is quite small, and worthy of a diversion if you are in the area and it is open, but only worth a specific journey if you are a die-hard visitor of places that are rarely open, just as I am.

The site is open all weekend (map link), and will be open again for London Open House Weekend. 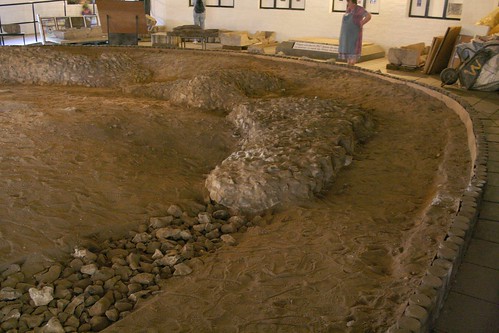 Wandering over to the Merton Abbey Mills found that they were less mill and more small market full of trinkets and a couple of unappealing pubs. A local road I ended up wandering along is called Liberty Avenue, which may be a coincidence, but it also marks the boundary of the lands owned by the Prior and might just possibly be a memory of the Liberty that the Priory might have possessed.