There’s a nice little exhibition on at the moment that records the diverse history of diversity within the nursing profession.

Nursing is not divorced from society, it is part of it, staffed by people from all around us. So it shouldn’t be a surprise that nurses are a mirror of society, and that a small percentage will be homophobic, racist, or whatever.

I’ve encountered a homophobic doctor before, but plenty who couldn’t give a damn about private life issues that are irrelevant to the medical diagnosis.

Fortunately, as society changes, so does the medical profession, and the exhibition celebrates some of the early pioneers of diversity in the medical services. Not activists, except maybe on occasions away from nursing, but people who just happened to be gay, or black, or female, or deaf, or foreign. 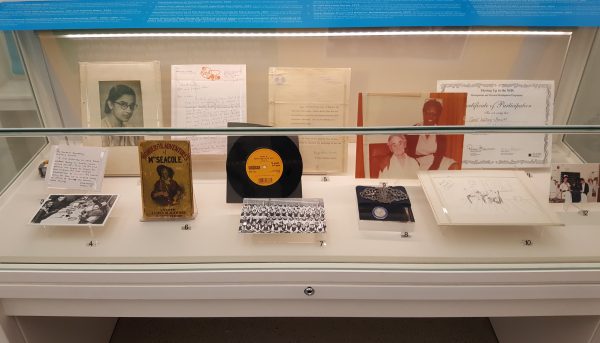 Some of the issues might be obvious when mentioned, such as the frowning upon women in the workplace in times past, which was still a problem in some sectors even recently.

Another is people moving to the UK from the Commonwealth to work in nursing, and facing the barrage of racist prejudice from both patients and colleagues, amplified by the fact that many came here to be trained as “second level” nurses.

One display case focuses on Uma Halder, who moved to the UK in 1953 to learn to be a nurse, and there’s a wonderful letter from the Indian Embassy offering a personal recommendation of her work in the UK and supporting her application to move up to be a “first level” nurse.

One aspect of nursing is that nurses tend to learn a great deal about their patients, but should they disclose their own private lives in order to build rapport with patients.

To be a lesbian nurse is still something that causes issues with some people, and the display looks both at the past, when the very term lesbian didn’t even exist, to modern pride marches.

A “couple” who managed to settle down together and adopt children in the 1930s without barely a murmur, because they kept what is presumed to be a love affair deeply secret. Even today it’s not certain if they were more than just very close friends.

An unexpected but beneficial side-effect of the AIDS crisis of the 1980s was the emergence of more gay nurses to treat gay men — looking after their own maybe, but also a shared cultural bond which made relating to patients easier, not to mention making patients feel that they are talking to someone who “understands”. 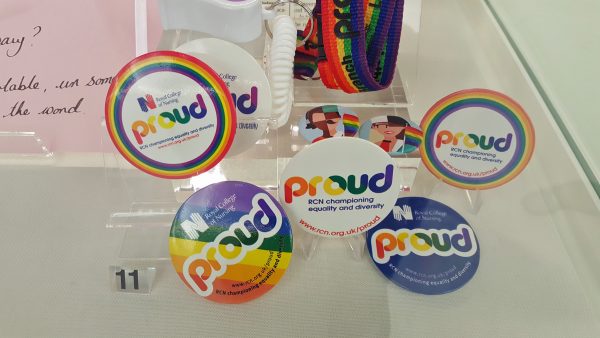 More recently the way discrimination is looked at has changed from one where people are disabled by what affects them into one where they are disadvantaged by society not responding to their needs, and indeed, their abilities. 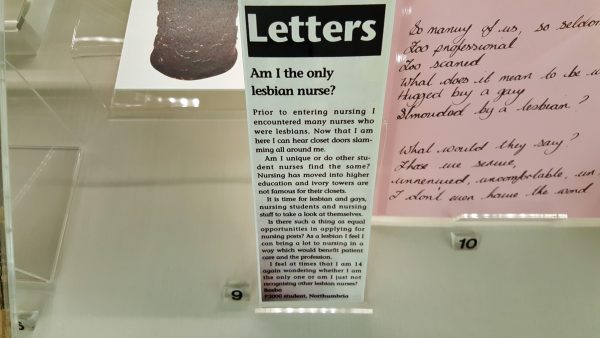 However, there are aspects of discrimination that can be surprising. It turns out that deaf people were not allowed (yes, actively banned) from being nurses in the mental health field until just 30 years ago, and it was only in 2004 that the first deaf person qualified as a nurse using sign-language.

The change came after someone twigged that as deaf people can also get ill, having nurses who are culturally similar can be an asset, not a burden. And indeed, as the display notes, the incidents of mentally ill deaf patients being forcibly restrained reduced significantly when deaf nurses arrived — simply because communication between nurse and patient became easier. 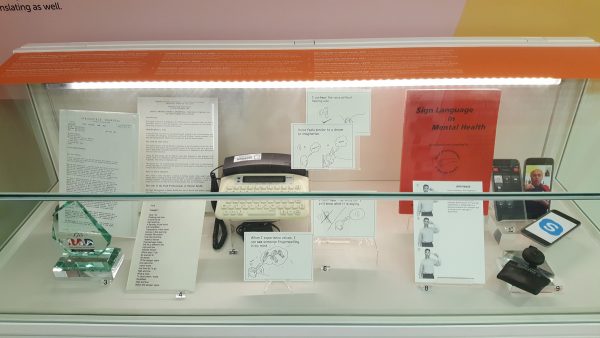 It also turns out that deaf people are not the same as Deaf people, which is a degree of differentiation that is a bit irritating. In my own situation, I am now confused as to whether I am slightly Deaf or slightly deaf, and why it even matters.

The exhibition is in the basement at the RCN Library and Heritage Centre (behind John Lewis Oxford Street) until 10 March 2018.