One of London’s bus operating companies has decided to urge people to get off the bus and walk along one of its bus routes. No, not some weird request to reduce overcrowding during the Olympics, but a bit of heritage and charity in action.

This coming Saturday marks the 100th anniversary of the opening of Bus Route number 38 that operates between Victoria and Hackney – and the company that now runs buses along that route is encouraging people to walk the length of it – for charity.

The London Transport Museum will also be marking the centenary this Saturday, with 3 double-decker buses on display in front of the Museum (RML 9901, RMC 1464 and RM5).

However – this Sunday (17th June), a number of heritage buses will also ply the route to excite bystanders and passengers.

The three buses on display at the museum will run regular trips throughout the day, then two more buses from Ariva’s heritage collection will turn up for a short while, an RT and an RTL bus.

In addition, at some point late in the morning, the exceptionally photogenic K Type bus from the 1920s and currently in the Transport Museum will run along the route – but only for bystanders to watch and photograph. Probably too precious to let us mere mortals on board. 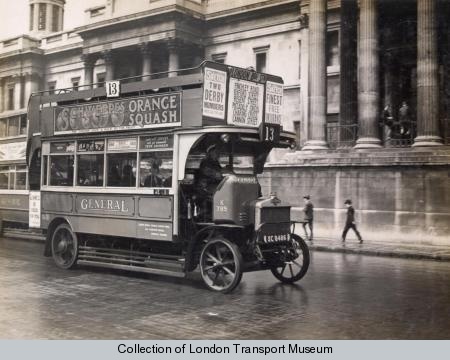 There should be a timetable for the heritage buses going up on the Ariva website shortly (should be there now, but isn’t) so check there closer to the weekend for the final details. Edit: details are there now.

The charity bit is to raise a minimum of £38 (geddit!) for the Maggie’s Cancer charity, and in exchange for sore feet you will get a t-shirt and free entry to the London Transport Museum. You have until 14th Sept 2012 to do the walk/raise the money.

More about the heritage of the bus route and the charity walk is on this PDF document.

Route 38 was also one of the Bendy Bus routes, and Diamond Geezer wasn’t impressed. The Three Ladies on a Bus also took a trip along Route 38.