Two shafts of spiral fluted and gold inlaid rock-crystal, with a jewel- and pearl-encrusted crown bearing the monarch’s coat of arms on parchment, the 43cm-long Sceptre was designed to the very highest standards. 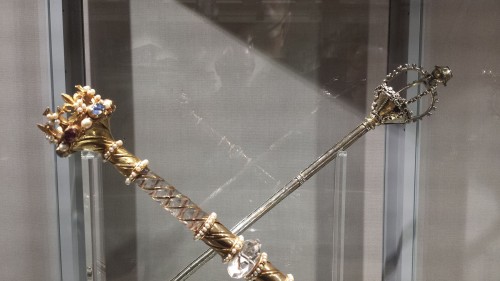 The Sceptre plays an important part in the City of London in the Silent Ceremony each year, when the new Lord Mayor is sworn in, and is a symbol of authority and of allegiance to the crown.

The only other time it is used is during the Coronation of a new Monarch.

It has been a working part of the Lord Mayor’s regalia for nearly 600 years, and yet has never been on public view.

According to recent research by Dr Michael Hall and Ralph Holt, the Crystal Sceptre was given by Henry V to the City of London as a mark of his gratitude to the City for providing the funds to fight the historic battle.

Which in a way means that the City indirectly paid for the Sceptre out of its own funds which it had given to the King. 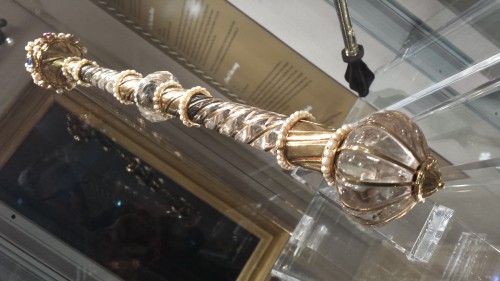 The crystals were probably carved in Paris, which was the leading centre for such work at the time, showing that commerce trumped politics when it came to trade between England and France.

Within the crown, can be seen the Royal Arms of England as adopted by Henry IV in 1406, along with the Lilies of France, as the King still held onto his claim over the French throne — a claim that only finally dropped in 1801. 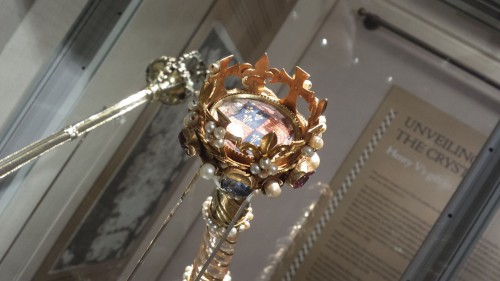 As well as the Crystal Sceptre, the exhibition case also contains the Hedon Mace, a weapon used at Agincourt and subsequently encased in silver-gilt. 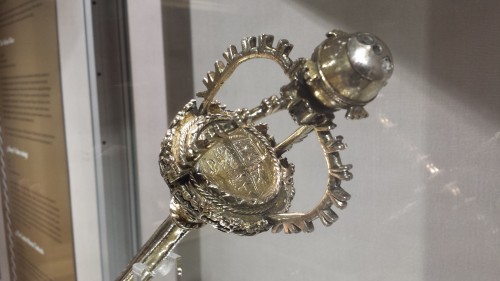 Both objects are on display in the Guildhall Art Gallery until 3rd December, which is free to visit.

You might want to avoid visiting this coming Friday though, as it will probably be “in use” at the Silent Ceremony, so not on display.