Have you seen the Metropolitan Arcade at Liverpool Street Station?

An early precursor of the modern shopping centre is the Arcade, and a rather fine example can be found just outside Liverpool Street station.

The Arcade exists thanks to the advent of electricity — as it sits directly over the railway tracks of the Metropolitan line, which at the time was a steam railway. When the line switched to electric locomotives, they were able to start to build over the station and the Arcade was born.

The old glazed arch roof of 80ft span over the platforms was replaced by steel and concrete floor providing an area of 17,000 sq ft, carrying the 100yd long, 18ft wide shopping arcade, with a new booking office, circulating area and tea rooms across the west end.

The Arcade, for which long standing Metropolitan Railway consultant, Frank Sherrin was the architect (completed by his son), was opened on 11 March 1912.

It has two imposing entrances, on Liverpool Street and Old Broad Street and is a key pedestrian link to both streets as well as entrance to the underground. The entrance on Old Broad Street has a neoclassical treatment, with painted stucco columns supporting an architrave with a deep fascia containing the inscription ‘THE ARCADE’. 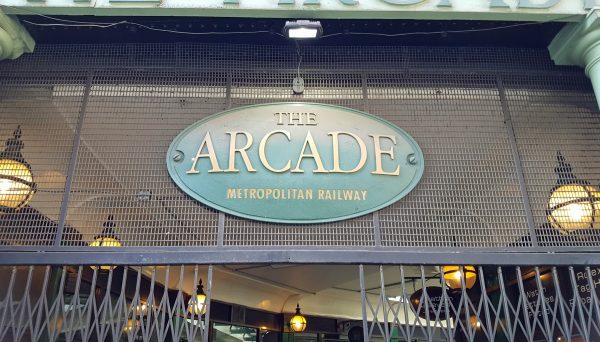 The corner is open, with views into a terrace of small shops on either side. These shopfronts have painted timber frames, with stallrisers in grey granite and are divided by pilasters. There is a metal framed pitched roof with extensive glazing that permits natural light into the ‘indoor street’.

In 1988, The Arcade above the underground station on the corner of Liverpool Street and Old Broad Street was due to be completely demolished by London Regional Transport and MEPC, who wanted to develop the site into a five-storey block of offices and shops.

More than 6,000 people signed a petition to “Save the Arcade”, and the historic Victorian building still stands today. The campaign against the development was led by Graham Horwood, who owned an employment agency within the Arcade at the time.

Saved from demolition, it was sympathetically reconstructed in 1994-95, with a more historically correct colour scheme. 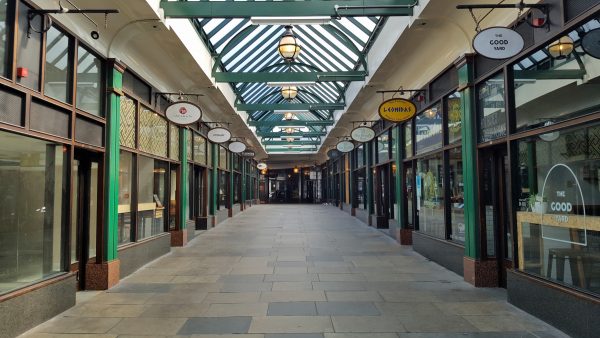 Although saved once, the Arcade is still not a listed building, so its future is never safe. Right now, a planning application is going through the system to refurbish the row of shops that line the outside of The Arcade, although fortunately, this is to be done in a suitable manner, with the frontages restored to a “late Victorian” design rather than some modern replacement.

What looks likely to vanish though, is this delightfully old map of the area that still manages to survive despite being hopelessly out of date. 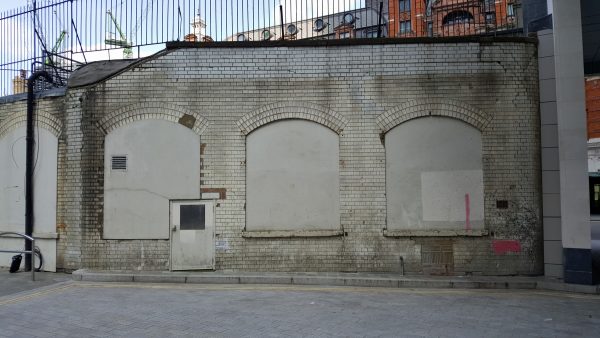 For a final hurrah though, go around the back of the Arcade to find a piece of the original Metropolitan line station’s supporting wall.