St. Swithin (or more properly, Swithun) was a Saxon Bishop of Winchester, but is more famously known for a popular rhyme that is associated with him:

Today, the 15th July is St Swithin’s Day – so if you look out of your window, the weather you see is what we can expect for the rest of Summer. 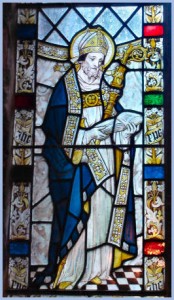 There is an actual scientific basis to the legend of St Swithun’s Day. Around the middle of July, the Jet Stream settles into a pattern that usually holds reasonably steady until the end of August. So, while you won’t get an actual 40 days of rain, the weather we get now is likely to dominate for the next month or two.

Quite where the legend of St Swithin comes from isn’t entirely clear.

He was buried outside the doors of his Cathedral when he died, specifically so that he could hear the rain falling, which suggests that there was some sort of weather link to the Saint. However, the oft-cited story that a heavy hail storm fell on the day his buried remains were moved indoors in 971 as an indication of his anger at the move seems to be a fairly modern story.

There are European saints who are also associated with the weather, so the thinking is that being one of the few learned people he might have had access to European scientific writings and popularised vaguely understood weather phenomena to his clergy.

As with most Saints, he wasn’t left to rest in peace. In addition to having his grave moved, as mentioned above, he was actual decapitated and his head sent to Canterbury, while an arm ended up in Peterborough. His tomb was then destroyed during the English Reformation, so if you visit the Cathedral today, what you see is a modern recreation.

There is also a link with London – as a church dedicated to his memory was built in the City, nearby the modern-day Bank tube station. The Church was destroyed during the fire of London, rebuilt by Wren, bombed by the Germans and finally demolished in 1962.

However, the iconic London Stone is linked with the Church, as it was incorporated within the Church’s walls in 1798 – until it was removed in 1940 following the destruction of the Church. It is claimed that the stone was completely undamaged by the bombs, lending credence to the legend that the Stone is a protector of the city (must have been having a day off when its home was destroyed).

St Swithin is also associated with Apples, and it is said that if it rains today, then he is blessing the apples so there will be a good harvest this year. Good news for cider drinkers.