Depending on how you count birthdays for infrastructure projects, today is the 25th anniversary of the official opening of the Docklands Light Railway – by The Queen on the 30th July 1987. And like the Queen, the DLR has two birthdays, as the general public didn’t start using the line for another month, because there were technical problems with it.

Originally designed as a light-railway, and still referred to as such, it has seen dramatic changes in its short life. If we look back to the early 20th century railway mania for building tube tunnels, even their frenetic rate of change pales to what the DLR has delivered.

Starting with single-car units running from Tower Gateway and then splitting to Stratford and to the bottom of the Isle of Dogs, change was obvious before it even opened, as the small Canary Wharf station was torn down without seeing a single passenger, and the much larger version we know today built instead.

Extensions to the line over the years, and extension to the carriages have seen a light railway that initially barely exceeded buses in capacity now challenges conventional rail services.

It’s not just the line though – how many other railways since the heady days of the MetroLand expansion have been built before the demand existed in order to create the demand and see empty lands populated, this time not by suburban houses but massive skyscrapers.

Although proposed back in October 1982, it was in August 1984 that the contract was awarded for a £60 million railway using the UK’s first ever driverless trains.

The line nearly didn’t get built at all, with Labour politicians at the Greater London Council threatening the block it if it — as planned at the time — was built by a private investor. Although curiously, a year earlier in 1981, Ken Livingstone had proposed something roughly similar, which was swiftly nicknamed the “Livingstone Line”.

The Times described the subsequent 1982 proposals as the first private railway since Victorian times, which prompted a letter the following day from an outraged pedant reminding them of the Romney Hythe & Dymchurch Light Railway.

Eventually approved as a state-funded light railway, the £60 million cost (£65-£77 million in some reports) was considerably cheaper than the proposed extension of the Jubilee Line which would have cost £300-£500 million. And that ended up costing £6 billion when eventually built.

Even before it opened, office developments being planned in 1985 were being conditional on the DLR getting an extension to Bank tube station – while the government was asking the developers to cough up the £85 million cost of the tunnel to Bank. Also in November 1986, plans were submitted for the £140 million extension to Beckton.

The railway as constructed by reusing the remains of the old London and Blackwall Railway which saved money in not having to buy land, and saved time in not having to deal with the legal headache of buying land. 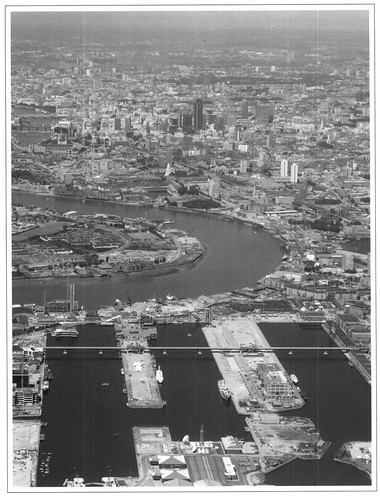 The railway is famous for its driverless trains and computerised signaling system, which is still — bizarrely to my mind — unique in London but curiously this was not the first advanced signalling system on the tracks. The old Blackwall Railway which used to run along the DLR route was also one of the very earliest users of the recently invented Electric Telegraph. Specifically, it used the Cooke & Wheatstone single-needle telegraph.

The same viaducts that once pioneered a revolution in transport communications in July 1840 did the same once more in July 1987.

At the time I didn’t live in London, but came in occasionally and recall taking a trip on the line, probably about 1991 as I remember getting off at the replacement Canary Wharf Station. Now considering the scarcity of photos of the time, I am deeply annoyed that I had dropped the photography hobby I had developed as a kid. 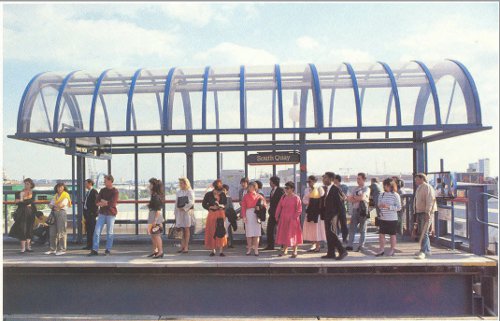 There are however some photos from the early days of the DLR here, including the visit by The Queen to Island Gardens for the official opening. She took a trip to Poplar to visit the control centre, then headed over to Tower Gateway. She also “drove” the train, as this tiny photo shows.

There are some more photos from 1987 here.