Published 21 May 2018 by By Ian Mansfield Transport News

The Southbank Centre has come to Hackney Wick in the form of a stunning new London Overground station, with vast expanses of wood shuttering concrete offset with weathering steel.

There’s been a station at Hackney Wick, but the ticket facilities were, well, a metal shed, and access up a long, very long, slope. Being on the edge of the Olympic Park and an area that’s seeing regeneration sweeping its way, the station needed a major overhaul.

Not so much the platforms, which are largely unchanged, but the access to the platforms, adding in shorter stairs, and much shorter lifts for both sides.

In recent years, it would not be unreasonable to say that TfL’s station improvement works have been rather bland, flat concrete, lots of glass and blue edging, but no real pizzazz. Hackney Wick is also a lot of concrete and glass, but it screams design. The architects, Landolt Brown say that they have drawn on the area’s industrial heritage for the design of the new ticket hall. A large glass wall brings light into the station, and when the subway is open, lets light into the underpass.

It’s not just a simple sheet of glass panels though, they’ve created a continuous chain of extruded glass hexagons that offer a dynamic wall where otherwise bland normality could have been expected. Held in place by weathering steel they will also be side-lit with a green glow at night. 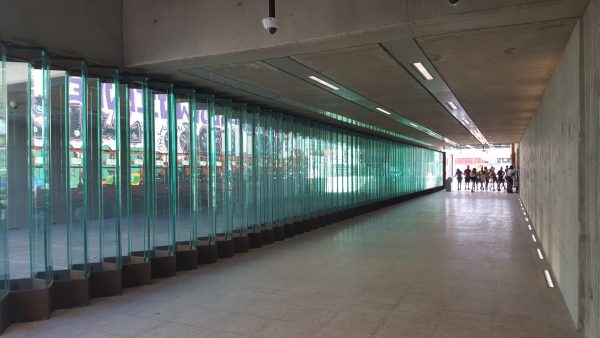 The hexagon fittings are not coincidental, but are a reference to chemistry, in the form of chemical compounds, which can be seen on the concrete wall — the formula for the world’s first plastic, parkesine which was invented in Birmingham, but first made commercially in a factory next to the station in 1866. 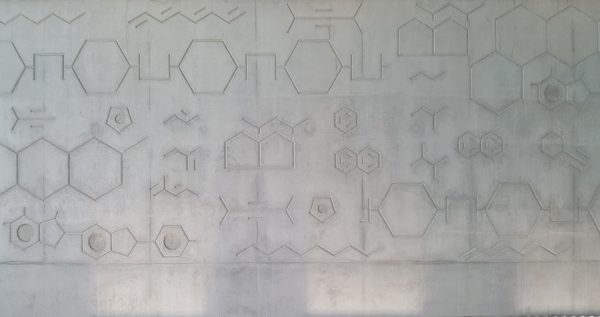 The stairs are the triumph though.

Made from the same wood panel effect that adorns the Southbank Centre, amongst other buildings, the concrete mass of the stairs has a texture that lighten the mass and delivers character.

The normally slightly garish orange of the London Overground is now a decorative flourish. A soft pink in the steps breaks up the grey. On a sunny day, the slats create church like patterns of light on the floor. But better is to come.

Around the side is a wedge of weathering steel, offering a brutalist termination in a space that’s so often overlooked. Weathering steel is also used around the edges of the station facade, giving it a marked contrast to the concrete, and a far cry from the plastic strips we have come used to from TfL in recent years.

Although the exterior is not finished yet, the end result will also include a new subway link under the railway tracks, offering a more convenient route for some passengers.

The overall effect is of thought and quality to a station that could ever so easily have received a necessary, but very bland upgrade. 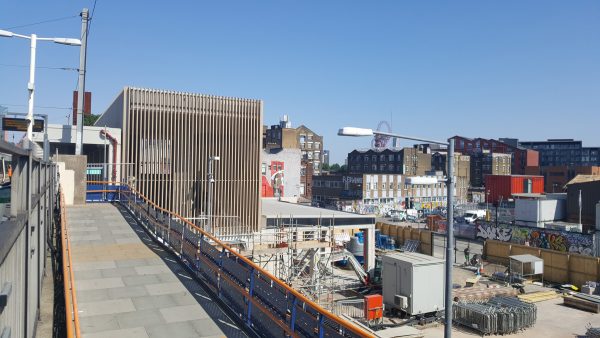 The former ramp up from the road 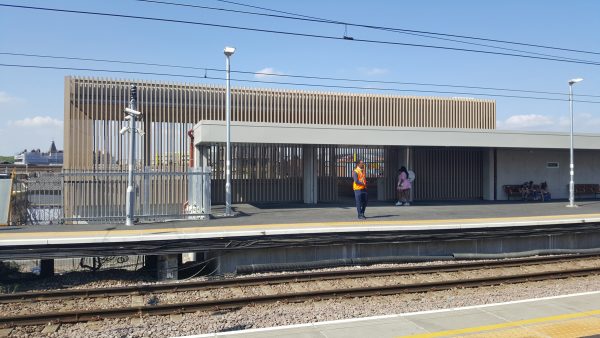 Stairs from the westbound platform

Shadows on the wood concrete 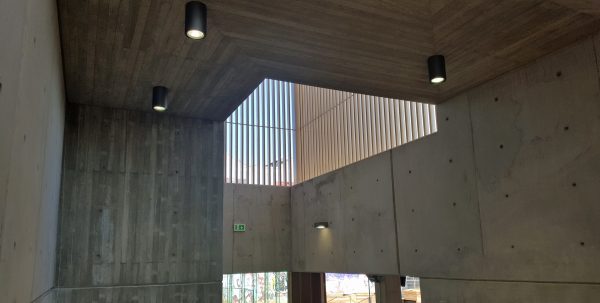 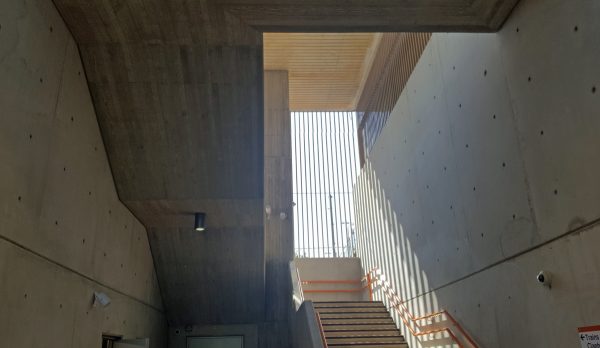 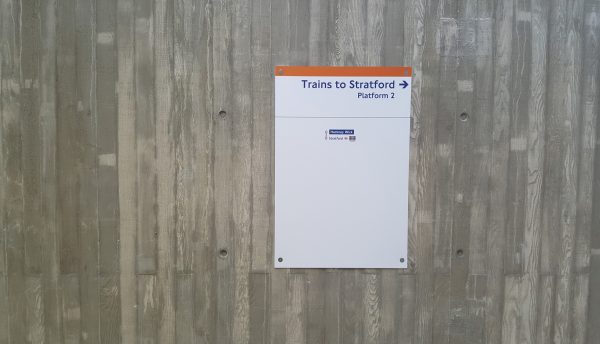 The colour contrasts make the signs stand out better 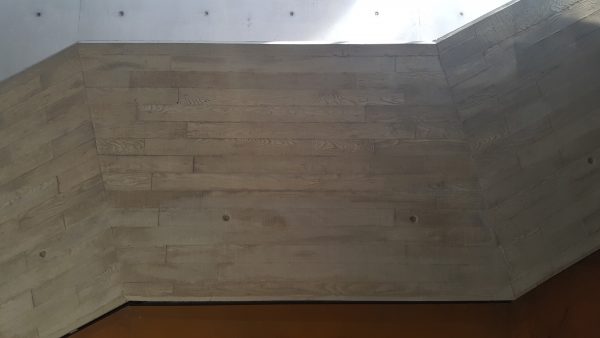 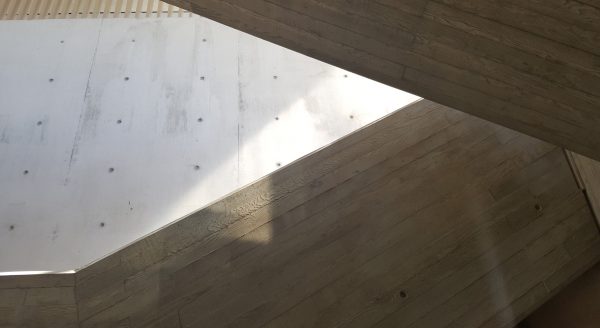 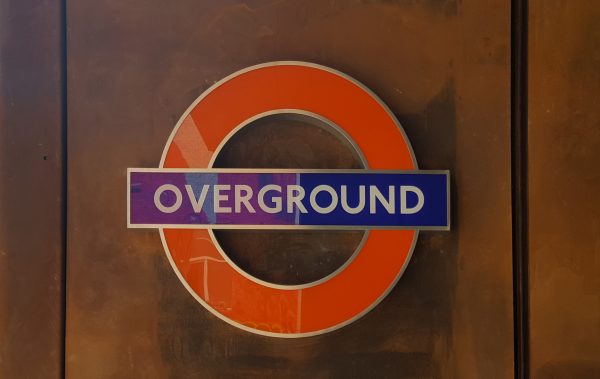 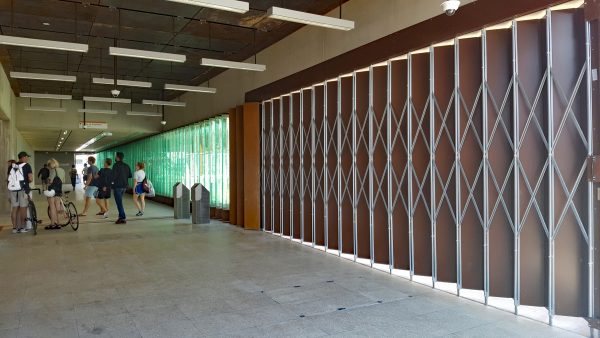 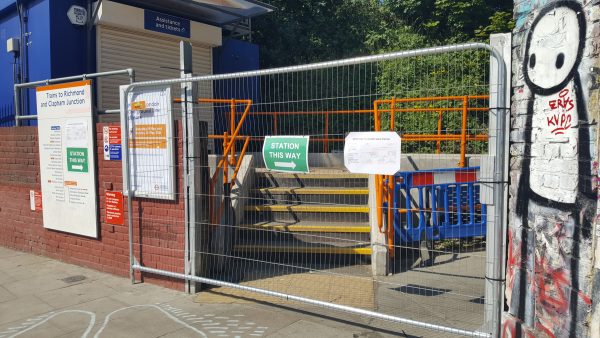