Gun Salutes in London during 2015

Published 24 January 2015 by By Ian Mansfield Events and Tours

A list of the gun salutes that take place around London during significant events in 2015. 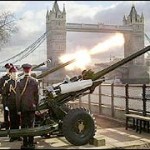 In the Royal Parks, the gun salute is fired by the The King’s Troop, Royal Horse Artillery, while at the Tower of London, they are fired by the Honourable Artillery Company.

We can also expect a gun salute when Catherine, Duchess of Cambridge gives birth to her second child — roughly around April time.

Others can be added — such as if there is a state visit at short notice.