A pocket book — that actually fits in a pocket — has been launched by regular transport publishers, Capital History and aims to offer a selection of guided walks around London looking for the surface signs of disused railways below ground.

Ben Pedroche’s Do Not Alight Here is twelve guided walks each based around a geographic area than a theme, plus a few notes about suggested tube trips that offer a chance of fleeting glimpses of disused stations as you whiz past them. 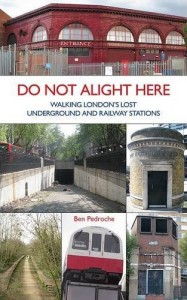 Being geographic makes it easier to flit from location to location, although that can mean you are looking at something tube related, and then peering over a fence at a long vanish overland train, then a bit of WW2 heritage. More interestingly, he also points out some of the back-doors and remnants that are so often overlooked and act as “secret knowledge” that usually impresses friends when you point them out.

In a few places the author lets his opinions about social matters show though, which may be enjoyable for some, and maybe a little grating for people who don’t share the same political views, but they are no more prevalent than you get from London guided tours anyway.

The photos of the various sites all seem to be recently taken, and there are sensible notes about areas where access may change depending on the whims of site owners, or building works at Kings Cross for example.

One constraint of being a pocketbook is that there is limited space to put in more than a few sentences for each venue – so it may welcome a bit of internet research first, then use the book as the route map between venues. I would also have probably liked a “tube map” of the area being visited to put tunnels and stations into context – but again, space constraints may have hampered that.

Otherwise, it’s a good pocket guide to the overlooked underworld which will probably appeal to the person who has a curiosity about disused stations but hasn’t quite gone over to the dark side of being a total tube-geek yet.

Also unlike most transport specialist books, it comes with a rather more pocket-friendly recommended price tag of £6.95.

If you want your copy to come with an author’s signature, he will be at the Transport Museum tomorrow (Sat) between 2-4pm signing copies.