The work is expanding the size of the museum by 40 percent.

They’ve now set the opening date for the four galleries, which will show off over 1,000 objects, to be the 20th September.

The £12.6 million gallery expansion will cover British and European exploration from the late-fifteenth century through to the present day, and will be broken into four themes – Tudor and Stuart Seafarers, Pacific Encounters, Polar Worlds and Sea Things.

Furthermore, the galleries will highlight how Britain’s relationship with the sea and its growing maritime power and ambitions shaped the country and impacted the world we live in today.

The project has been timed to be completed in mid-2018, to allow the Museum to take a lead role in Cook 250 – the commemoration of Lieutenant James Cook’s 1768 departure down the Thames in HM Bark Endeavour on the first of his three voyages of exploration to the Pacific. 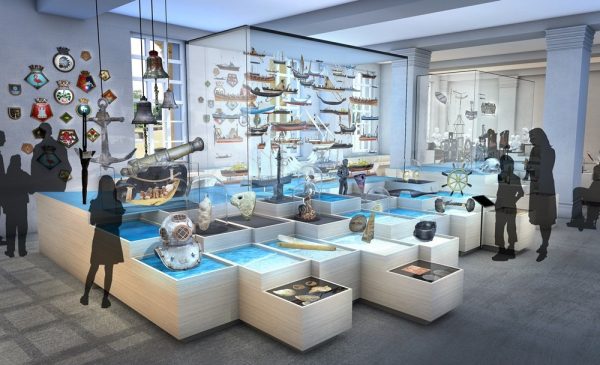 Artists’ impression of one of the new gallerys © Casson Mann