I thought work on this had been paused as part of the Great Olympic Engineering Shutdown, but a note from TfL earlier today says that a rather interesting air cooling system will be introduced at Green Park station this summer.

London Underground has already successfully drilled wells to source naturally cool water from deep below Green Park and will now install air cooling units that will use the water to cool the Victoria and Piccadilly line platforms.

The concept of using colder ground water to cool tube stations and then dump the warmed water elsewhere is already proven, as Victoria Station uses a similar concept, taking water that leaks into the Circle Line tunnels as the source of “coolth” to remove heat from the platforms. That delivers the equivalent of 100 kW of cooling to the station.

Green Park is more sophisticated, as four deep boreholes have been drilled, two to suck up cold ground water, and the other two about 200 metres away pump back warmed water deep into the soil. In fact, only two boreholes will be used at any time, the other two being reserves. 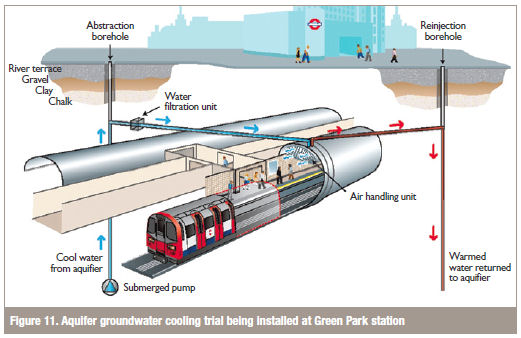 It’s estimated that each of the air circulation units that will be installed above the platforms could each deliver up to 100kw of cooling to each platform.

While it wont cool the tunnels, it will enable some heat to escape from the carriages when they pull into the stations and let refreshing cool air waft over people. I notice a similar blast of cold air coming in on the Eastbound Jubilee Line when the doors open at Westminster station.

I’ve written more extensively about the cooling the tube project before in 2008 and 2010.