Gold display opens at the Bank of England’s museum

The Bank of England’s museum has had a bit of a refurb recently, with a new small permanent gallery added devoted to that most iconic of banking stores — gold. 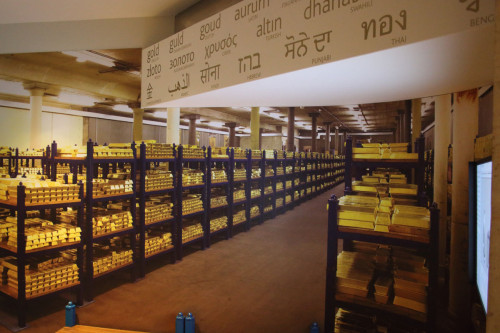 A modest cabinet brings together gold bars from Roman times to the present day, and the signs explain why gold has been treasured for thousands of years and reveal the scientific properties that make it a vital ingredient in modern technology.

The display includes a rare gold bar from the 4th- century AD, a bar given as a symbolic gift to the church by The Queen at her coronation in 1953.

I also learned that the measurement, carats derive from the ancient Greek word for carob, kerátiοn: the seeds of the carob tree were used to weigh gold and precious metals because it was (incorrectly) believed that the seeds were perfectly uniform in weight.

Sadly, the image above is simply a photo I took of the photo of the vault underneath the bank taken by someone else that now makes for a large background in a side room with a video about the metal and its fiscal importance.

I am sure it will be selfie-heaven, although maybe wisely, placing it in the small video room meant that — certainly, while I was there — the opportunities for selfies was fortuitously small. 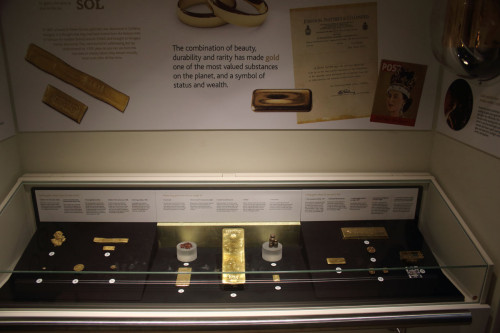 What’s more photogenic is the long-standing display around the corner of a full-sized gold bar in a glass box — with a hole so you can slip your hand in and touch the precious lump of metal, and try to lift it.

Gold is heavy, surprisingly heavy. In fact, so heavy that I can’t understand why that bus didn’t slip over the side of the ravine instantly at the end of the Italian Job.

For once, I suspect that the ban on flash photography is less to do with protecting precious relics from damage, than courtesy — the glass box probably reflecting most of the light and ruining your treasured tourist snap. 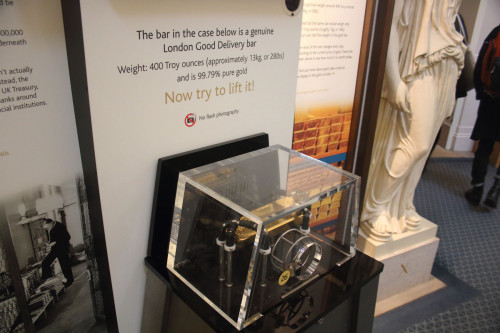 The museum, around the side of the Bank is worth a visit as the rest of it is really quite good, even if the opening hours are a bit frustrating — at just Mon-Fri 10am-5pm.

If a weekend visit is the only option, then make a note as it is open on two Saturdays during the City of London festival, ​4 & 11 July, and during the London Open House Weekend in September. Aim for the July visit though, as it tends to be quieter.