Published 6 November 2010 by Events and Tours

As I got slightly excited about earlier this week, the public are being allowed to go on board HMS St Albans for a look around the ship today. Guided tours for residents of its namesake, St Albans are taking place on Sunday, but today was a general free-for-all wander around the ship. 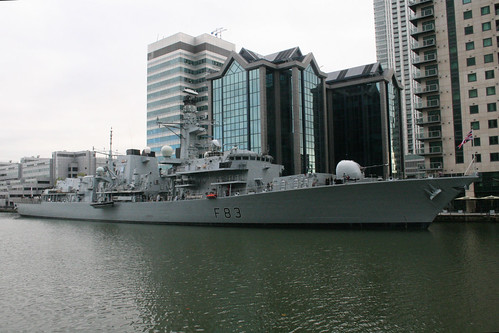 Unlike a few other formal tours I have been on, this is a general wander round the ship, with strategically placed signs to explain things and some sailors offering demonstrations – which means you learn less about the ship (unless you ask questions), but does mean you can spend more time taking photos and wandering around at your own leisure.

While the demonstration did involve getting to hold one of the heavy shells their main gun can fire, it didn’t sadly involve firing said main gun. Boo, hiss! 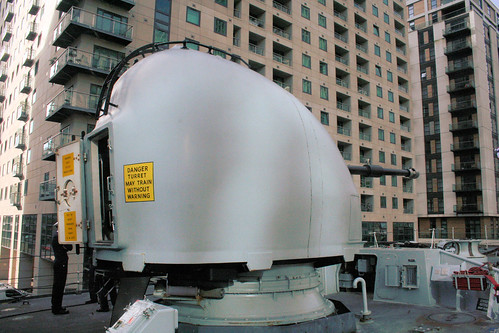 The main gun at the front can rotate almost all the way round, but can’t quite point at the command deck – probably just as well – and can rotate at something like 14 degrees per second, which is actually quite fast for such a large bit of hardware.

Although we could peer inside the gun, no one actually works in there during firing as it is completely automatic, and the shells are loaded from the lower deck. You also don’t want to be on-deck when it is firing as the empty shell cases are just thrown out of the side and scattered around the deck, until they roll into the sea as the ship turns.

The ship is also armed with torpedoes and Harpoon missiles. The torpedoes are on display in the rear hanger, although a couple of my questions were responded with a “sorry sir, that’s classified, but you’d be impressed”.

Some of the warning signs dotted around the ship looked a bit alarming. 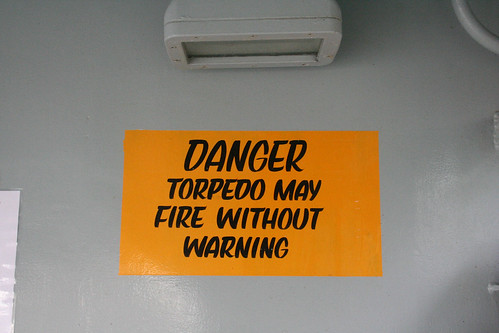 For the kids wandering round, probably the most exciting sight was at the rear flight deck – a Merlin helicopter that the ship uses, and yes, you are allowed inside for a look, while the pilot gave a talk about its capability. 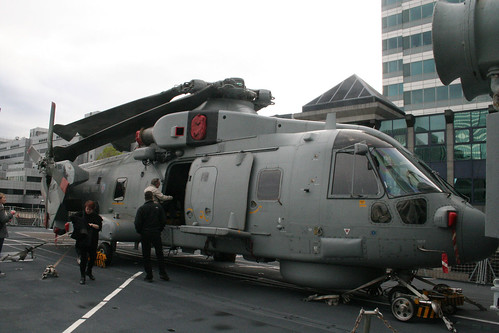 I’ve often seen footage of helicopters hovering over speedboats when stopping pirates and presumed the proximity was to disrupt their actions with the wind from the helicopter blades. Actually not – while they do indeed use the down force from the blades – it’s sufficiently powerful up close to stop a speedboat dead in the water until the main ship can arrive. You learn something every time.

The pilot also offered a rather graphic description of the machine gun that can be pulled out of the main access door – and “rain down death from two miles away”. Maybe lacking in discretion, but certainly triggered the imagination. 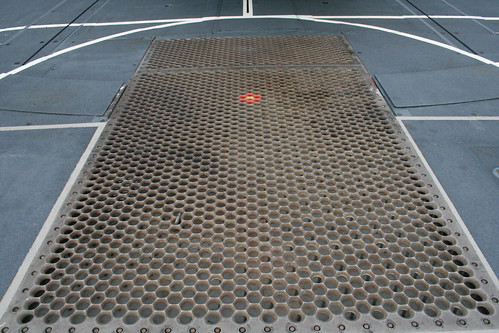 Sadly, the tour didn’t include going inside the ship, but having been around a few already I appreciate it isn’t the sort of place you can just let people wander around, mainly as they can be incredibly cramped and confusing places.

A shrill sound that permeated the area turned out to be coming from the diesel engine keeping all the electrics running – which is a bit different to other ships which visit the docks as they often have a very deep rumbling sound. The sailor I chatted to seemed surprised that other Navy ships visit the docks, but we do seem to have some turn up every few months – although this is the first time they have held a public open day.

Hope they do some more open days, as they are really quite interesting.

2 Pings/Trackbacks for "Going on board the Royal Navy Frigate, HMS St Albans"