Published 9 July 2016 by By Ian Mansfield Architecture, Events and Tours

For two hundred years, you’ve been a grand stately building in a prime part of London, but just recently, holes have been knocked in your backside, and lots of modern art scattered around your grand rooms.

You are Canada House, a stately looking building in Trafalgar Square, with a surprisingly diverse history.

The medical lot left in the 1960s, when the Canadian government bought their half as well, knocked the two together and revamped the frontage of the building to make both halves look as if they had always been one building.

More recently, they bought the building behind as well, necessitating a lot of work to knock holes in the back and create links between them — with steps, as both buildings have floors at different levels.

Then the grand building, shorn of 1960s interior amendments and restored to a  decent modern interpretation of a grand London building, was filled with examples of Canada’s modern art.

While closed to common folk for half its life, and generally not open to anyone other than those seeking admission to Canada for the other half, the building is now opening its doors to show off the recent refurbishment.

Once through the usual security barriers to get inside such buildings, I received a curious glance when I decided to leave my all too noticeably large camera bag in the cloakroom — as the battery had died. A camera phone doing the job reasonably well indoors, but a battery-charging-failure that was to be seriously regretted later on.

An exhibition of photos of the world’s most ethical diamond mine helped to while away some time waiting for the tour to start, which commenced in front of a throne bought for the opening of the building as a diplomatic mission by King George V.

Apparently though, he never sat on it.

A chair in a display box though, I could almost see the ghost of Jeremy Bentham residing there. 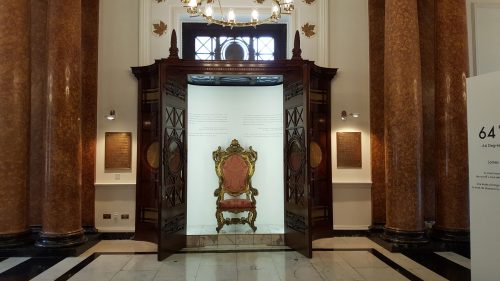 Being Canada, the tours can be in English or French, but the group was an apparently rare one in being mostly British, and only a few Canadians — a reverse from the normal mix. So English for the tour.

Running along the front of the building on the ground floor are a couple of large open rooms, used for official functions or by Canadian companies hosting events in the UK. The wood on the floor is Canadian. Of course. 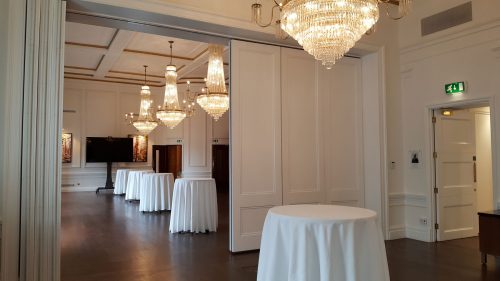 All grand buildings have a grand staircase, and this is the original, although now aided by a huge hanging light installation, which is a bit of a marmite moment, with people liking or loathing it. Personally, I like. The thin filaments and tangled mess sits well within the otherwise overly austere stairwell. 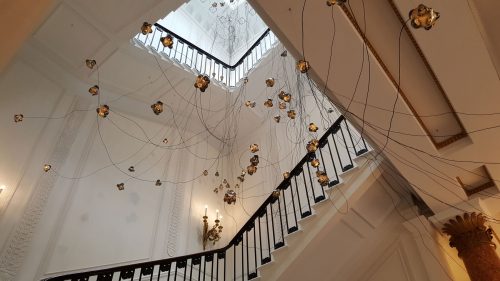 One floor up, and there are a series of meeting rooms, each named after a Canadian province, and decorated with local art.

Huge thick, and even through shoes delightfully rich carpets each reflect the colours or nature of that part of Canada. 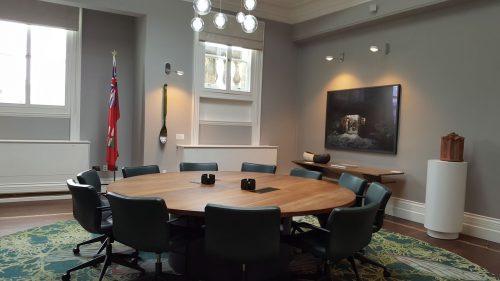 Apparently, the front of the building used to have the flags of the provinces hanging outside, but then it wasn’t obviously a Canadian building to a passer-by. Now the province flags are inside, and the Canadian national flag is outside.

A corner office looked like the High Commissioner’s but isn’t, but because it looks like it should be, is often the one used for photos, or by visiting government ministers. 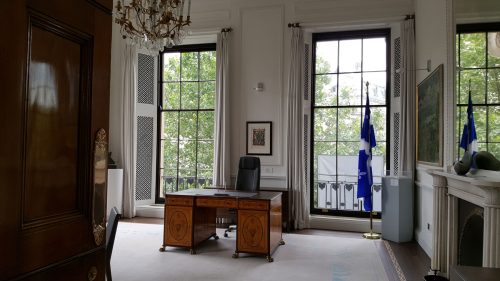 Up here is also the grandest of the rooms, and threw the guide a bit when he walked in, as he had planned to show off another colourful carpet. Except it was covered in tables and chairs for an event, leaving hints of what was below, even as the ceiling actually captured most people’s attention. 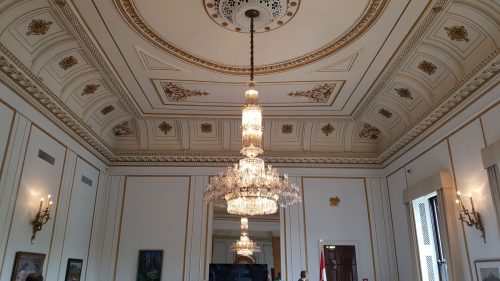 Now, an offer of a lift, or narrow stairs, to go to the top, and up what was quite evidently previously servant stairs, but now posh and clean.

A small piece of Greenwich was unexpected. 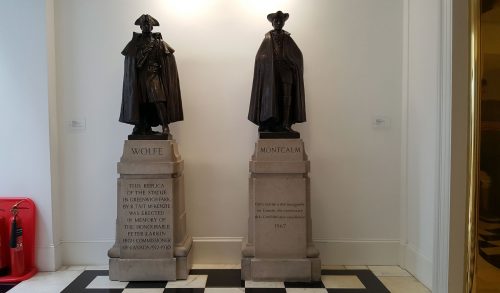 As was the 10 Downing Street style staircase lined with former Canadian Prime Ministers. 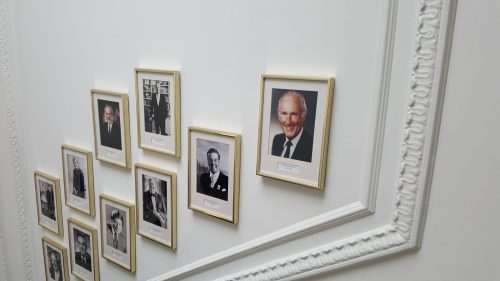 And finally, to the top, and an area which was once a clutter of small offices, but now a very modern, very large boardroom.

And no one cared. 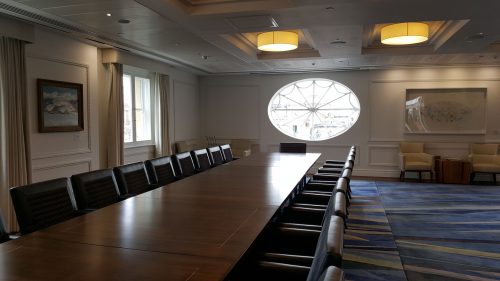 Because up here are some amazing views of central London. Nelson over there, Big Ben, Trafalgar Square, all visible through the oval windows.

And bees, two beehives, and a bee hotel for the solitary sort.

Damn the failure of my big camera! But there’s more, a small roof terrace leads off from the boardroom, for the most exclusive of summer evening drinks. 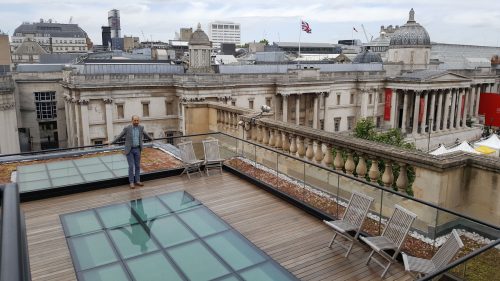 Not used as often as you might suspect, thanks to the slightly awkward access, it’s one of those hidden gems that can be shown off to wow the visitors.

When it’s not raining. 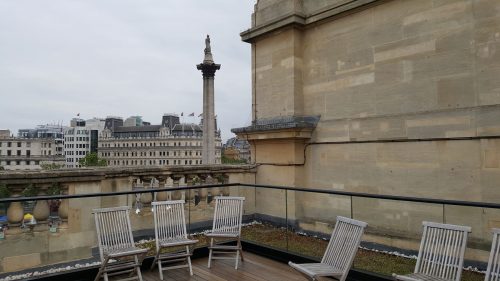 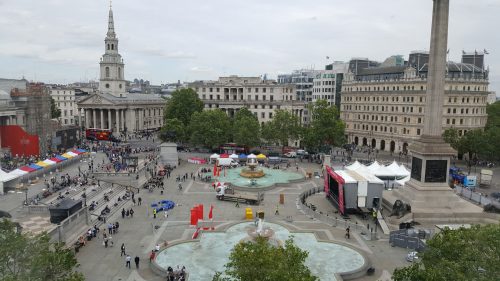 Tours lasted a bit under an hour, and it was a good trot around the building showing off some of the art, but mostly, dropping insights into how and why rooms are laid out, thanks in part of the history of the site but also in having to allow for politics which more ordinary buildings never have to contend with.

Like all embassy buildings, it is here as much to serve a consular function for visitors as to show off what Canada thinks of itself as a country. 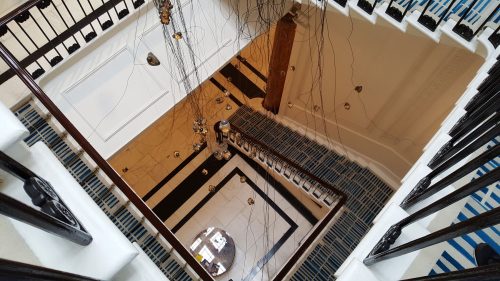 Anyone who does Open House Weekend would probably enjoy a tour — which is free and can be booked here.

There is also a gallery next door which is open to the public throughout the week, currently focusing on Canadian science. 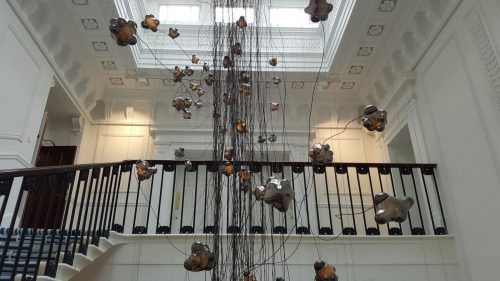