Go inside the Bank of England’s Tivoli Corner

One of the delights of London is that you can walk past something loads of times, then suddenly discover something interesting about it. 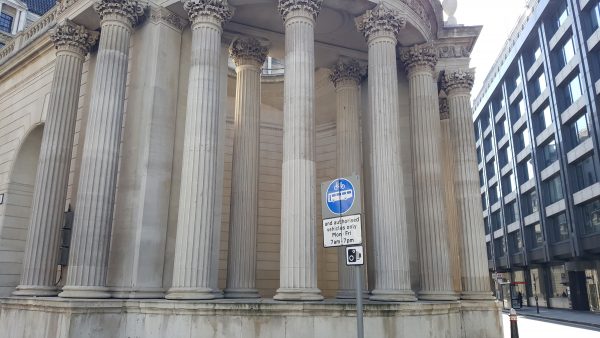 Just behind the Bank of England is a mighty columned passage that lets people get around the corner without walking in the road. However, it wasn’t always like this, and in fact, you’re walking through what would have once been inside the Bank itself. 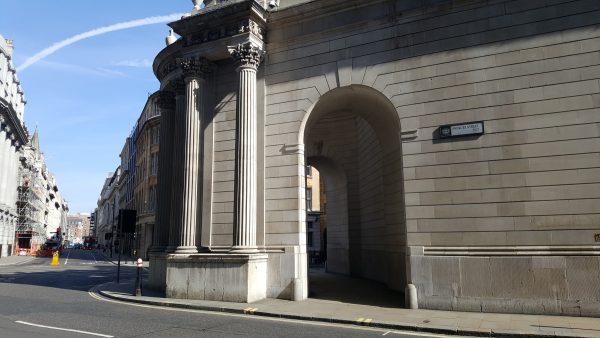 When the Bank of England was extended in the early 1800s to take over the entire block it currently occupies, the architect, Sir John Soane pondered what to do with the corner at the back of the building.

Unlike the other four corners, the roads meet here at an acute angle making the corner unusually difficult to design for. In fact the original plans would have been a flat face with a triumphal arch above.

However, after a few years, a new design emerged as a semi-circular design with the false door behind and the pillared frontage that remains today.

In the 1930s, much of the building’s interior was rebuilt by Herbert Baker, and while most of the original protective wall was retained, here at the corner a major change was made — a walkway was cut through it.

The walkway runs behind the former false door, so when you go through the walkway, you are in fact walking inside the old bank.

If you look up, then you can see carved into the roof a message: 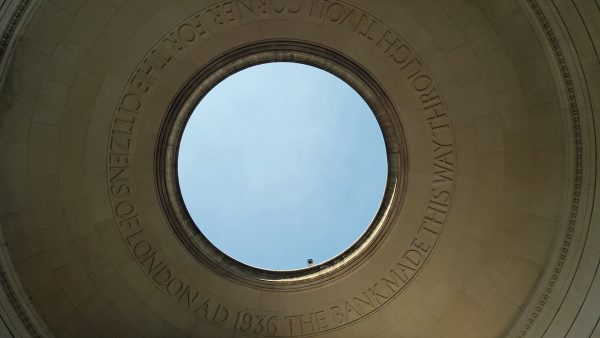 It certainly saved people squeezing around the narrow footpath on the outside, although the modification wouldn’t have been needed has Soane stuck to his original flat design.

That he went for the “temple” though was to win him many architectural plaudits, including a Gold Medal from the Royal Institute of British Architects in 1835.

Soane often referred to the corner in his lectures and publications and had envisioned it as a focal point for the area.

Oddly, it probably isn’t that much of a focal point these days as the roads it faces onto are more back-street thoroughfares than they used to be at the time it was built.

Do walk around the outside though, for through the roof window can be seen the gold plated statue of a female figure, curiously named after the male Ariel which was seen as “the dynamic spirit of the Bank carrying credit and trust over the world”. 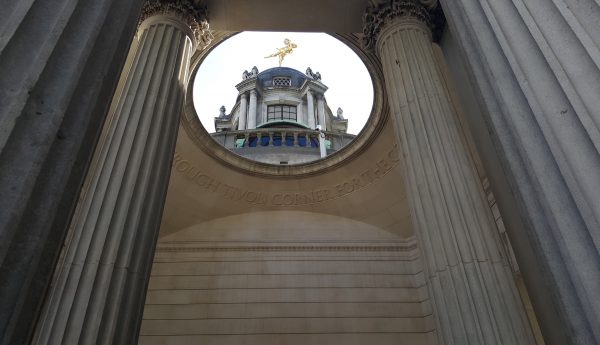