Published 1 May 2014 by Events and Tours

Short notice as I have only just become aware of this, but a 34-metre high tree will be carried through Peckham tomorrow (Fri) lunchtime.

Macbeth will never be defeated until Birnam Wood marches to fight you at Dunsinane Hill.

Said tree will however be in three pieces, as it actually an art project for a local school and needs to be moved to its new home. Macbethian plots to overthrow the Mayor of London will have to wait. 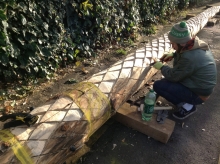 Six Fresian stallion horses drawing three wooden carts will carry the tree, which has been cut into three sections, from the old school to the new school.

Members of the public will be able to follow the procession on the pavement.

The whole thing kicks off at 11:30am, starting at the South London Gallery.

The procession [route map] is from Bellenden Road in Peckham to Farmers Road in Camberwell, following a route along Peckham Road, Southampton Way and Wyndham Road.

Shadow Curriculum launched in June 2013 when over 100 students and 50 teachers went on a trip to a forest in Sussex to witness the felling of a 34-metre high Douglas fir tree. Following this event, Heather Morison worked with classes to explore the life-cycle of the tree and how it was felled, making botanical drawings and preparing for the tree’s arrival at the school.

The tree was then transported from Sussex to Highshore School in Peckham where it played a central role in the arts curriculum through this academic year in the lead up to the school moving to a new site in Camberwell in June 2014. The tree became a fixture of the playground, with pupils walking along it or using it as a bench to sit on, making it their own as it became part of their everyday school life. Pupils also witnessed the transformation of the tree over the course of the year. They took part in stripping the bark, which they used to make bark masks. The tree was then carved and will soon be tarred, as it is prepared to be moved to its final home.

The project will see the transformed tree being raised back into a vertical position to tower above the new school building, acting as a permanent art work for the new school