The main hall of the Natural History Museum, home for the past 30 years to the replica dinosaur, is soon to have a giant flying whale in its midst.

The museum has announced that from 2017, the Diplodocus cast that has stood in Hintze Hall for 35 years will be removed. In its place, a real skeleton of a giant blue whale will be suspended from the ceiling.

But a large flying whale? Where have I seen that before?

Ah ha – the Hitchikers Guide to the Galaxy!

The museum though, said that the decision to suspend the blue whale skeleton from the ceiling of Hintze Hall (previously Central Hall) is not a homage to Douglas Adams, but part of a larger plan to show new specimens in the space.

The swapping out of the dinosaur for the whale marks the beginning of a decade of change for the Museum described in its new strategy. The Museum plans to change how the collection is developed and displayed for future generations as well as how it creates and shares its scientific research. 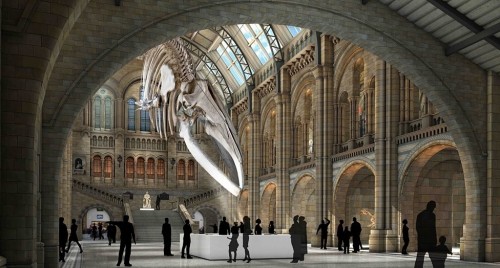 The whale was found beached and injured by whalers in Wexford Harbour, Ireland, in 1891. It was bought by the Museum and first went on display in the Mammal Hall in 1938, where it currently hangs above a life-size model of a blue whale. 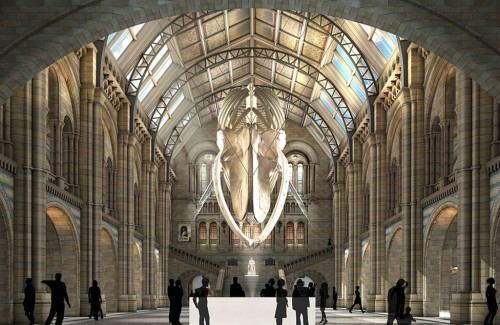 The Diplodocus cast, known as Dippy, might not go into a side room though, as there is talk of it going on tour around the UK.