Frank Pick is the (in transport/design circles) legendary head of London Transport in the 1920s and 30s who drove the newly merged different transport companies to adopt a single brand identify.

London is famously a city made up of villages, and covers a vast area. You can live in monolithic suburbs, inner city towers, or surrounded by fields, and all are within London. The city is for many people today more closely defined by whether you are in a London Transport area, or not.

Is your bus red? You’re in London. If it’s green, you’re outside. Even when within a London borough, the colour of the bus defines if you feel part of the city or the shires.

No other organisation so utterly dominates the brand identity of what makes London a single unified city — not the Mayor’s office, not the mainline trains, not the utilities, nothing other than the one massive city-wide organisation that is London Transport.

And the single unified brand that dominates was largely the creation of Frank Pick, who while not a designer himself understood the huge value in good design, and was willing to spend to get it.

Later this year will mark 75 years since his death, and the space left by the now redundant wall of payphones within Picadilly Circus tube station will be given over to a work of art as memorial to the man. 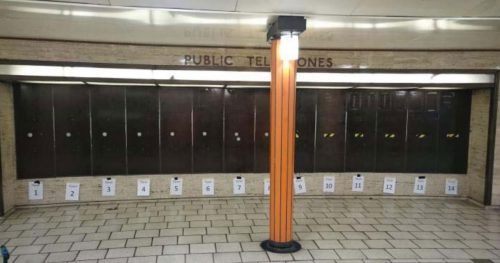 The installation will incorporate Frank Pick’s name in neon light, on the familiar roundel, and Pick’s own words will be presented adjacent in polished cast bronze letters using the Johnston font. The memorial will be unveiled on the 7 November 2016 to mark the 75th anniversary of Pick’s death and the centenary of the Johnston typeface.

The Transport Museum is currently fundraising for the memorial artwork, and donors can (ahem!), Pick, from a range of goodies as a thank you.

Donate, and pick your gift here.