Frobisher Crescent at The Barbican

Thanks to an invite from the chaps (and chapesses) over at the Londonist, I found myself lurking around the entrance to The Barbican Centre this morning – waiting for a chance to have a look at the first significant redevelopment in the Barbican estate since it was built. 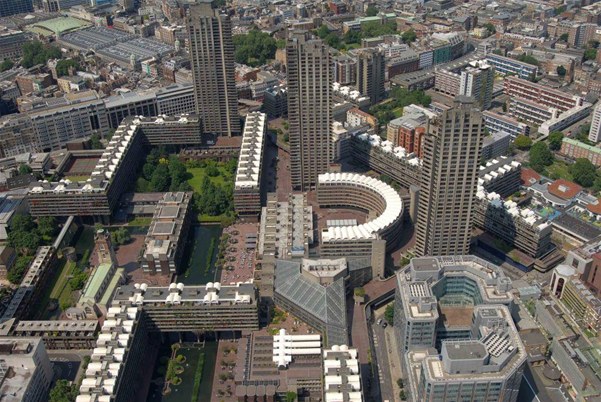 Frobisher Crescent is an odd bit of Barbican history, being originally planned as a semi-circle development, with shops on the ground floor, then several floors above with flats. For reasons which seem lost in the mists of time, the decision to fit out the block with residential flats never happened – and the upper levels were leased out to the City of London Business School, with the lower levels being used for conference rooms, a cinema and the like. The shops never arrived.

A central courtyard, called the Sculpture Court also never lived up to its name and remained barren.

The Crescent is named after Sir Martin Frobisher, who was one of Queen Elizabeth’s private pirates and tended to rob the Spanish fleets of their New World gold. Frobisher’s Barbican connection is that a fair amount of him is buried in St Giles’ Churchyard. But St Andrew’s Church at Plymouth nabbed his heart and entrails.

The school recently moved out though, leaving the opportunity to finally finish off the original plans for the development, and the property is being converted back into flats by United House. They say a key factor in winning the contract is that they have their own builders and don’t outsource the work to 3rd parties. Gives them a tighter level of control, which is important as this is a Grade 2 listed building.

We were taken up to the “ground level” (which is actually the 3rd floor!) for a look and some photos, then up to the 6th floor where the builders are working. They are only converting floors 7,8 and 9 into flats, but using floor 6 for admin – the current occupants being moved into portacabins for a while (presumably not at gunpoint). 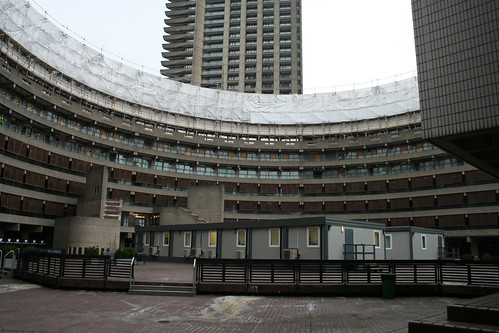 Suitably attired in hard hats and high-vis jackets, we went up a floor, and wandered right around the curve of the building to see the end flats, which are being fitted out first as show-flats for the salespeople. A total of 69 flats will be available, mixed from studio to 3-beds.

As the building is directly over the famous Barbican art centre, they have to work around music concerts, so that their drilling works on the solid concrete structures don’t disturb the more delicate tones being created below. 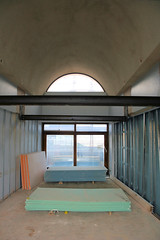 The most spectacular part of the development though is the top floor, where each flat had an arched roof which is nearly double story in height. The larger flats will retain the full height in places, while a mezzanine floor will be installed in places. Most residents will have a bedroom with a huge curved ceiling over them. 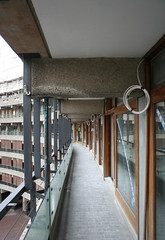 Another impressive aspect is the very wide doors that slide open to let people onto the balcony. They are part of the listed aspect of the building and will be restored as originals – although that means they can’t be double-glazed either. The balconies also fail current building codes – and the barrier is deemed too low now, so a thin wire barrier will be added to bring them in line with the regulations. A bit petty, but that is red-tape for you.

It was a very interesting view of the estate, and I can’t help but be a bit envious of the people who will be able to afford the properties there.

Oh, and the Sculpture Court will finally start living up to its name – and will become an area for changing displays of art work.

Thanks to Londonist for the invite, and United Houses and tta group for taking us around.

1 Pings/Trackbacks for "Frobisher Crescent at The Barbican"