A press release from the Royal Navy that is worth highlighting – as the Royal Navy’s Type 42 destroyer, HMS Liverpool is in London for a few days – and the public will be let on board to have a look around.

HMS Liverpool is the last Batch 2 Type 42 in left in service and is on her farewell tour before being decommissioned.

Billed ‘the heroine of the Libyan conflict’, the Crazy Red Chicken as she’s affectionately known by her ship’s company – courtesy of the Liver bird on her badge – will be berthed at West India Dock near Canary Wharf (map link).

She will be open to the public this Sunday (29th Jan) between 10am-4pm.

The ship is roughly similar sized to HMS St Albans, which also held an open day in Nov 2010, which was very enjoyable.

Here she is arriving in West India Dock – photo taken by a local office worker, OrangeCamperVan. 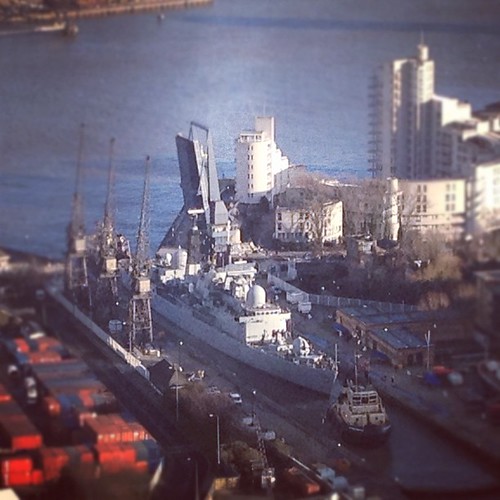 Presuming the HMS Liverpool open-day will be similar, then expect the opportunity to wander around the upper decks quite freely and chat to the sailors on board.

I really hope they haven’t carried out the Ceremony of the Constable’s Dues up at the Tower of London though, as I have been wanting to photograph that for years, and will have missed it – again.

Ahh, looks like the Ceremony of the Constable’s Dues will take place at the Tower at noon on Saturday.