There are a couple of free B&W movies being shown on a big screen this week which may interest you – and which interest me which is why I am going to them.

This classic monster movie paved the way for scores of films to follow. Film-fans, dino-devotees, ape-admirers and explorers-extraordinaire should not miss this special opportunity to see this silver screen giant in all its glory.

UCL Historian of Science, Dr Joe Cain, will introduce the film, and a free glass of wine will be served in their amazing old fashioned museum following the film.

JZ Yoing Lecture Theatre, in the UCL Anatomy Building on Gower Street (next to the Darwin Building). 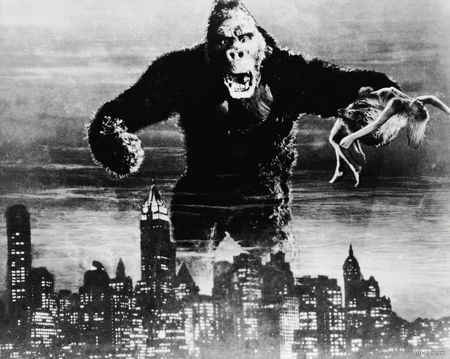 Thursday 23rd Oct at 6:30pm – has two silent era movies being shown in Trafalgar Sq (so I hope it doesn’t rain).

The year is 1940 and tension is growing between the empires of United Europe and the Atlantic States. The film is pro-pacifist, and was filmed in 1929 and has a frankly rather dubious plotline.It is notable more though for its vision of the future â€“ projecting 1920s utopian ideals into a 1950s vision.

If you want to see an early Channel Tunnel and railways in the sky (and running over the top of Tower Bridge), this is the movie for you. The film features a lot of iconic special effects, even if they make an early Dr Who episode look professional by comparison.

There will be live music to accompany the film.

A second 10 minute movie is shown afterwards, The Fugitive Futurist â€“ which proffers futuristic visions of London landmarks by way of a â€˜magicâ€™ camera.