For 100 years, it’s been a Long Way to Tipperary

On this day, 100 years ago was the first reported observation of soldiers singing the music hall song, It’s a Long, Long Way to Tipperary, which was to become one of the most famous songs of World War 1.

The song itself, originally known as It’s a Long, Long Way to Tipperary, but having since dropped one of the Longs — maybe for being just a bit too long, was written, it is claimed in January 1912.

The origin of the song was later to be contested in a bitter copyright battle, but in 1914, minds were one more pressing matters, and for reasons that are still shrouded in mystery, the song became incredibly popular with soldiers. 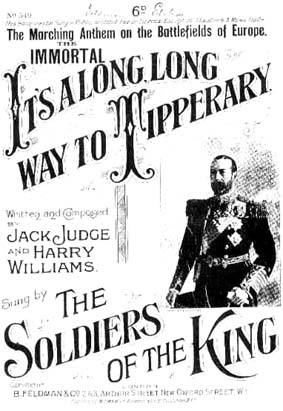 The first record of soldiers singing it came from a Daily Mail journalist, George Curnock who noted that he saw the Irish regiment the Connaught Rangers singing this song as they marched through Boulogne on 13 August 1914 and reported it in the newspaper on the 18th August 1914.

As newspapers were regularly sent to the soldiers, the news of the song spread quickly.

It was noted at the time that the popularity of the irreverent song was somewhat at odds with convention, which favoured more military and patriotic songs.

Then again, the Times of 29th Sept 1914, mulling on this phenomena commented on how the German was wont to sing patriotic songs, but that “our soldiers” prefer a joke that reminds them of home to a song that tells them they are heroes.

The newspaper added that “Tipperary may be less dignified, but it, and whatever else our soldiers may choose to sing will be dignified by their bravery, their gay patience, and their long suffering kindness. We would rather have their deeds than all the German songs in the world”.

A version recorded by the well-known tenor John McCormack was released that November, further boosting its growing popularity.

Sir Robert Baden-Powell, of scouting fame, also supported the song, saying that in war there are four C’s needed — Courage, Commonsense, Cunning and Cheerfulness. The Germans, he said, had three, but only the British had Cheerfulness, which was typified by the irreverent singing going on.

There were numerous articles in magazines at the time pondering the strange appeal of a song about a town that few would have otherwise have heard of, of the jocular tune that appealed even to the musically illiterate who couldn’t read the score.

And they all concluded with a very British shrug to be totally mystified by the phenomena of the song, but accepting that it was terrifically British to be cheerful in the face of such military hardship. 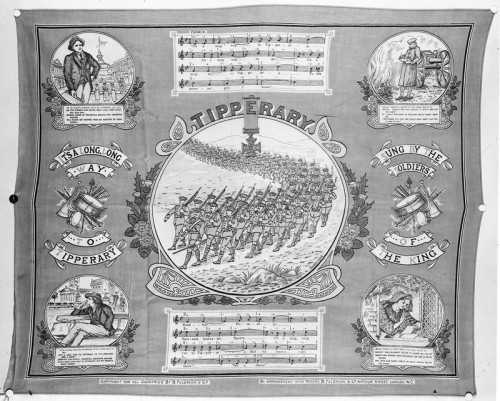 It wasn’t long before the song was being described as an “Army Marching-Song”, as happened, I think first, in the Musical Times that December. And ever since it has been seen as a peculiarly military song, even though it was never intended as such.

The song was however used in a darker manner on occasions, with protests against the war sometimes being drowned out by loyalists singing the song loudly and repeatedly at rallies of anti-conscription activists.

Today we might describe a song going from casual popularity to mass-market as having gone viral. Unlike most here-today/gone-tomorrow viral fads on the internet though, Tipperary has endured, and continues to do so.