Of all the plans announced, only the controversial road tunnel at Silvertown is actually under any stage of development, but the Mayor said that the plans will be modified in to make them “greener” and more emphasis on encouraging people to use public transport.

The proposed tunnel was consulted on last year and following enhancements requested by the Mayor, a six-month Public Examination will begin next week. Enhancements made to the plans inherited from the previous Mayor, include a commitment to more buses, a possible bike ferry service and fewer construction lorries. 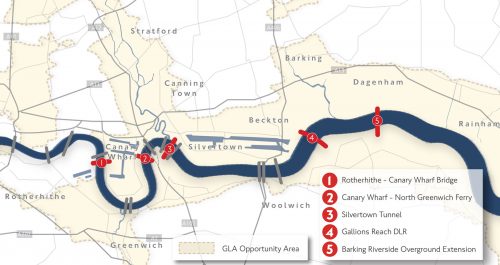 Apart from the road tunnel at North Greenwich/Silvertown, there could be a bridge linking Canary Wharf to Rotherhitehe, replacing the ferry that currently links the two sides of the Thames.

A procurement process will be held next year and subject to funding, availability of land and relevant approvals, the new bridge could be open by as soon as 2020.

Your correspondent is less keen on that, preferring a tunnel.

The ferry though might just slip around to the other side of the Isle of Dogs, as plans will be looked at for a possible link with North Greenwich. That would pretty much mirror the Jubilee Line, but will be quicker for people working at the planned Wood Wharf development which is a bit of a walk from the Jubilee line station.

The long suggested plans for the railways to cross the Thames and link up with the Thamesmead area could be a major boost to the region, which is quite weak in public transport links at the moment. Even the arrival of Crossrail at Abbey Wood leaves Thamesmead a decent bus ride away from the trains.

What is being looked at is whether the DLR could jump across to the area between Woolwich and Thamesmead, or if the new London Overground extension to Barking Riverside could be extended further across the river towards Abbey Wood.

TfL will look to source the majority of funding for these crossings through third-party developer contributions and via existing Community Infrastructure Levies.

Which is code for “there’s no money in the pot” so new home owners will be picking up the tab. Whether developers will be developing, and to the necessary degree to pick up the cost of these new transport links is the big unknown.

However, it will almost certainly bring a cluster of high rise, high density tower blocks to the area, as that is about the only way such development can pack in the numbers to leave a surplus for transport upgrades.

If all the plans are approved, and funding secured, then construction could start in the next 5 to 10 years.