Today was the completion of a DLR extension project which had taken the light railway down towards City Airport – and after a short hiatus for tunneling work – under the River Thames to Woolwich town centre.

I had planned to be particularly geekish and catch the very first train to Woolwich at about 5:30am, but the temptation to finish off an opened bottle of Port the night before proved too difficult to resist, so with a slightly heavy head I caught the train at a far more reasonable hour.

As we headed out towards King George V station, which had been the temporary end of the line for the extension, the train progressively emptied until we got to the station and there were about 4-5 people on the train. I actually got off here as I wanted to get a photo of a DLR train approaching the station with a display board showing the new destination. 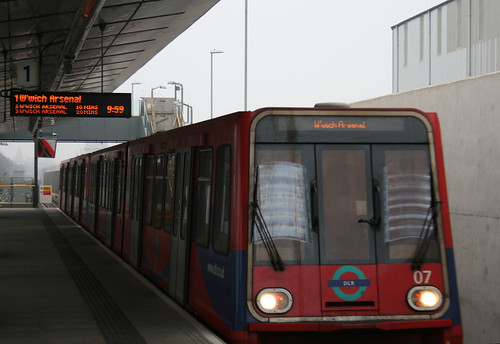 Catching the following train, we drop steeply into the tunnel – which I noticed has a pedestrian walkway along the entire length – and thence to Woolwich. A couple of air vents towards the end give you glimpses of the construction techniques used, and then a very sharp curve brings us to the new station itself.

The station has two exits – one which maintains a clinical grey colour leads to the existing overland station – and the other exit, with somewhat garish artwork leads to the town centre. 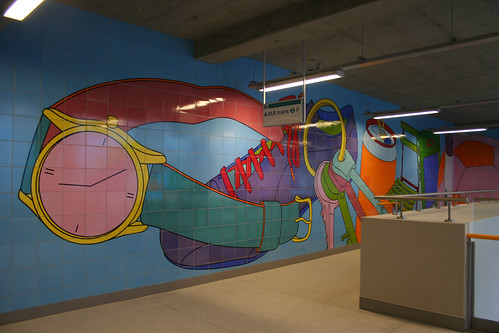 The Costa Coffee shop was unfinished as the station opened – someone probably screwed up there, but the station itself was fully completed including all the posters and signs which, ahem – enhance the decor.

As part of the opening day celebrations, a brass band marched through the town centre and the council had set up some trestle tables to promote the regeneration of the area. 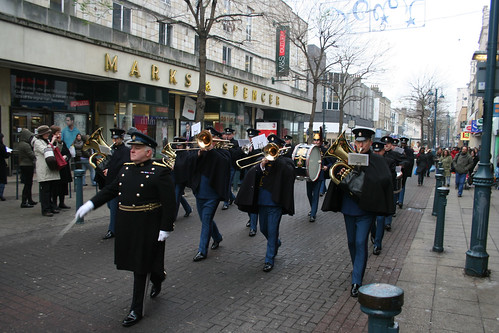 When I arrived, the bulk of the few passengers around seemed to be fellow geeks with cameras – and when I left it was a mixture of geeks and locals out to explore the “shiny new thing” with their kids.

There is an interesting historical parallel here.

In 1902, a foot tunnel was opened under the Thames at Greenwich – and in 1999, the DLR dug a tunnel in almost the same spot (just deeper) to run though Greenwich to Lewisham.

Back to the station opening though – and the place was packed full of smiling DLR staff – and the trains themselves seemed to have a lot of staff around. All smiles and helpfulness – except one smiling chap who warned me that photography would only be tolerated on the first day.

Here we go again – yet another damn jobsworth with a photo-phobia.

I presume that as photography is acceptable on Saturday 11th January 2009, but will be frowned upon on Sunday 12th January 2009, that some mysterious change will occur to the building overnight which renders it suddenly a security threat of some sort and hence photography will be banned?

Nope – just damn stupidity from a jobsworth who wants to spoil a harmless hobby.

A bad way to end the morning.

The next “big change” will be the oddly little published opening of an entire new line on the DLR – running between Stratford and Canning Town stations. Before that though, a lot of stations are being upgraded to support 3-car trains which will offer an effective 50% increase in capacity along parts of the line, and a redesigning of the junction by West India Quay to take out a bottleneck at that point.

The ever cynical Diamond Geezer has a sadly accurate report on the delights at Woolwich – and as I used to live nearby, I never failed to marvel at how a town centre can feel like it is perpetually stuck in a wet autumn, even in the height of a hot summer. The town centre has some amazing heritage, but a lot of it is frankly being left to rot. Hopefully, the link to Canary Wharf and the restoration of the Arsenal will bring in the money to improve the town centre and restore those grand old buildings.

I have uploaded the rest of my photos to the usual Flickr location.

2 Pings/Trackbacks for "First Day of the Woolwich DLR"