“I apologise for the cramped conditions” was how the first train on the newly extended East London Line was introduced to its excited passengers. For yes, the majority, if not indeed the totality of the passengers were highly excited. 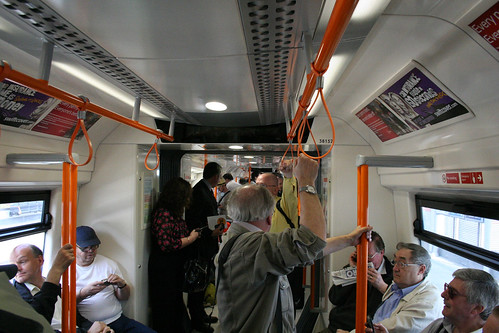 A moderate collection of “sad train geeks”, such as your correspondent, who also spied the pseudonymous editor of London Reconnections at Dalston Junction station and a rather larger collection of TfL suits finally getting to travel on a train line they have been working on for the past few years.

Now in a preview mode with limited offerings, once it gets up to full steam, you can expect the rush hours to be equally cramped as we had today, although I doubt commuters will get an apology over the tannoy from the Managing Director of TfL London Rail, Ian Brown.

Anyhow – after hanging around in the ticket hall, an announcement that the first ELL train was now ready and people passed through ticket barriers with the excitement of children about to meet Father Christmas. Down in the surprisingly spacious platform, people held aloft camera phones, and press people held more substantial cameras, trying to get photos of a new train in a new train station, all the time being serenaded by a musical combo.

To reasure everyone that this was indeed the first train – both ends of the train had a large sign affixed to confirm it is the first passenger train in April 2010.

Technically not the first though, as a driver testing the trains last week opened the doors at a public station and passengers, seeing a train with open doors, blithely chose to get on – only to be evicted at a later point when train staff realised the test train had gained a bit of unexpected baggage. 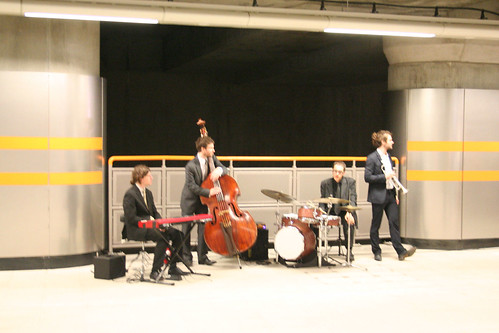 A short speech over the speakers from the aforementioned boss, and then the train was off to cheers and applause.

As we pulled into stations along the line, people determined to take the first train, if not quite so determined as to get to Dalston Junction joined us – and to add normality to a special train – some people actually got off and hurried away to less frivolous pursuits. 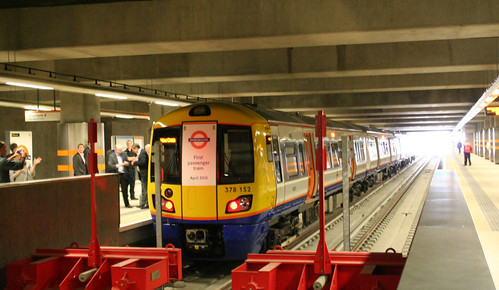 Leaving the shiny new stations, we returned to the older existing line at Whitechapel. Then passing through the Brunel tunnel by train, just as I had passed through it on foot a few weeks ago – and it was a slight disappointment that they didn’t light up the tunnel (as they can) as the inaugural train passed through.

Now into South London, down to New Cross and that was the trip over. A special trip today that will soon become mundane for everyone else.

The speed of the trip from North to South London was surprisingly swift, although possibly more noticeable to me due to a very fraught and time consuming trip to get to Dalston Junction thanks to several problems on the tube and DLR.

Taking the train back, in addition to be considerably less packed as the media and suits departed, the air conditioning in the train was now very noticeable and gratefully received on a warm lunchtime.

A downside that I expect will have people scratching heads in some confusion about the planning decision, as well as rubbing them in pain is that one of the curved bars for standing passengers to hold on to has a curve that is just 6 feet from the floor – leading to a bump for your correspondent when standing under it.

In addition, the “tube maps” on the trains are complete for the full running of the network – something which Diamond Geezer noticed this morning doesn’t apply the station and website maps, yet. 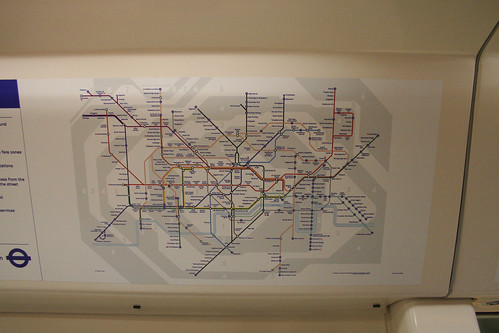 Will upload more in a day or two – work was rather fraught this afternoon and I only messed around with the key photos.

1 Pings/Trackbacks for "First Day of the East London Line"