What was once the preserve of celebrities, the stretch limo seems to have mirrored society’s weight gain problems and what was once really just a slightly longer but otherwise average-sized car is now a giant white whale of a beast.

These mobile Ibiza’s often disgorging screaming girls on a night out from Essex have however a dark side that goes beyond your author’s instinctive snobbishness.

Some are downright dangerous.

Most are fine, but as in all aspects of life, where there is money to be made from drunk party goers, then less salubrious people will seek to cut corners.

I am not sure which is more shocking though, that of the 358 limos checked over the past year, a total of 232 were banned from the public road… or that there were quite so many limos plying the streets in the first place.

In addition, 27 limos were seized on the spot, presumably leaving their occupants standing on the pavement looking a bit bewildered at the sudden change in their party plans — and in a bit of a media set-piece, one of those limos was sacrificially dissected a couple of weeks ago. 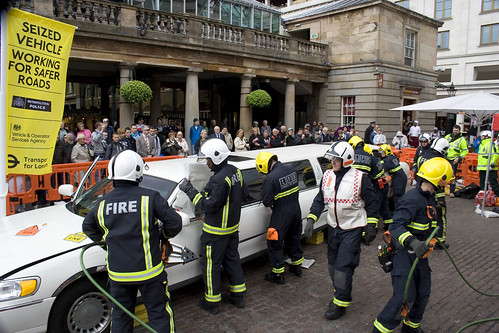 Seized by the police on The Mall last June, the limo was taken to Covent Garden to be ripped apart by the Fire Brigade to demonstrate how difficult it can be to extract trapped people inside these leviathans if something were to go wrong.

Sitting inside the limo on this occasion were not a group of party goers, but an elderly couple presumably out for an anniversary treat, and their driver trapped in the front. The three occupants are members of Casualty Union, an organisation I also used to belong to.

Casualty Union is a group of people who act as victims in accidents, and it is largely an acting role, but as a first-aider I joined as you can learn a lot about being a better medic if you know what it is like to be a patient. So I spent a decent amount of time being covered in blood, rescued by firemen from smoke filled buildings, or once, being cut out of a crashed plane.

Back to Covent Garden, and as soon as the Fire Brigade turned up it was a demonstration of what they have to do in order to extract people from cars.

The limo was physically immobilized with wheel blocks, and labels slapped around warning that the airbag was still active.

They then covered all the glass with plastic film so they can shatter it safely. Then along came the big boys toys as they started to rip the drivers door off. They don’t cut it off, but use a huge powered tool that slowly methodically ripped the door away from the frame. 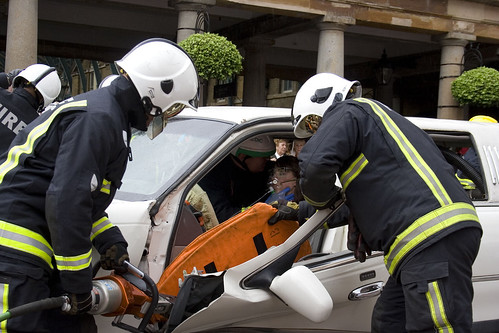 Door removed, ambulance staff could get in to lay the driver down on a stretcher for removal by the fire brigade, and as soon as the blood covered prone motorist was taken to one side, she got up and wandered off. Not a miracle of the NHS, but the reality of being in Casualty Union.

On this occasion, getting one of the passengers out required something a bit more dramatic — the removal of the entire top of the car — so out came large cutting claws that methodically tore through the roof while saws sliced around the sides. 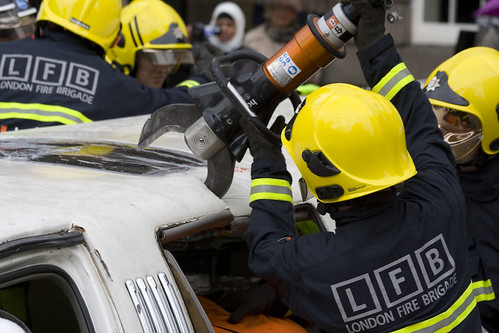 Worth noting, that even when you know its just a practice, being inside a car that is being torn apart by rescuers is quite noisy and scary — so it must be far worse for people trapped in a real road accident.

A short time later, and off came the roof, then loads of blankets lain over the sharp edges, and eventually out came the passengers on stretchers. 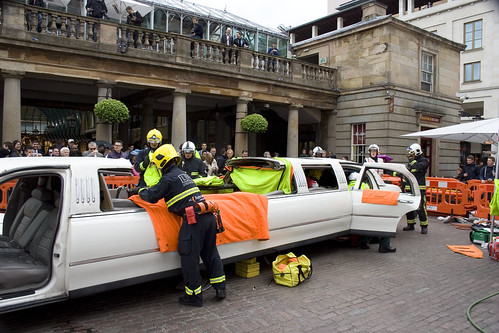 All told, it took about 30 minutes to extract the passengers, and leave a disembowelled whale in their wake. But it also involved a lot of people to do that.

The former owner of the limo was not around to see what happened to his car. 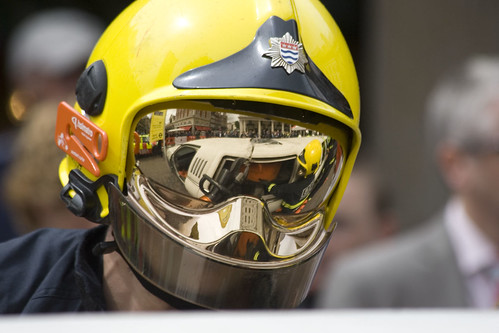