A stone marking the half mile mark to the Tyburn Tree gallows stood at the top end of Edgware Road for, well, an unknown period of time.

The stone originally stood opposite the current junction of Star Street and Edgware Road, and was presented to the London County Council in 1909 who erected it in its current location that March. For many years it stood inside the window of the Lloyds bank on the corner, until fairly recently it was shifted again, this time, as part of a refurbishment of the Hilton London Metropol hotel.

Now it just happens to be just inside the covered entrance to the hotel, where it looks more like a piece of modern art than a historic relic. 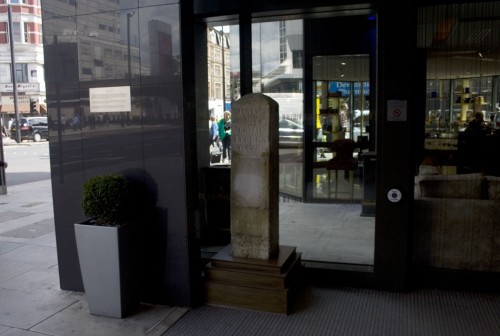 The stone itself has some faded text on one side, but is otherwise unadorned. A small plaque nearby indicates its significance.

I wonder how many of the hundreds of thousands of people who pass the hotel, or the many thousands who pass through the doors ever stop to look at the stone as it stands there mute testimony to a grizzly past? Certainly, it’s something to show off to friends if you are in the area and dazzle them with your knowledge of London arcana. 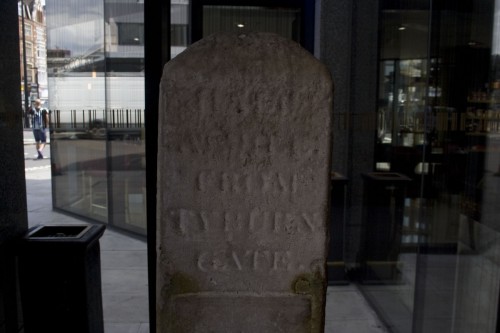 There are claims that this could be Oswulf’s Stone, which stood where today’s Marble Arch stands, although I am personally dubious. It’s easier to carve a waymarker monolith from specially chosen stone, not a random lump.

Of course, if you head down to Marble Arch, you can find the stone in the pavement that marks the spot of the Tyburn Tree, and just around the corner, a convent dedicated to the Catholics who died for their faith.