Fighting Fantasy books to return, but not as books

Yesterday glorious news as it turned out that the Fighting Fantasy range of books were 30 years old (ouch!) and new titles would be released.

However, it turned out that the new format will be a second attempt to turn the Fighting Fantasy brand into a game for mobile phones. No, no, and thrice NO! 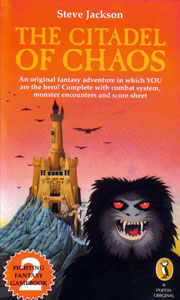 Fighting Fantasy, as anyone of a certain age will know are books – one hundred percent books. OK, and the occasional throw of a dice.

Putting the bookish game into digital format destroys what for many was part of the appeal of the game – the necessary flicking through pages to get to the answer for the choices we made in the gameplay.

You are on page 17, and in the story facing the the evil troll. The book suggests turning to page 130 to throw a spell, page 136 to run away and page 164 to fight it. Each option leads to hurried flicking through pages to find the answer.

Turning those pages though was a very tangible action, as physical as the games plotline was imaginary, and introduced a momentary delay to finding out the answer which heightened the expectation of the outcome, which rather too often, was to be told you just died.

On a computer game, click the option and the answer is there in a fraction of a second.

It’s not as if modern society is adverse suspense driven delays. Reality TV shows will play 10 seconds of doom laden music as the camera pans across the faces of the contestants to create artificial suspense – which actually annoys me greatly because it is such an artificial effect.

Here, the fantasy books have delays inherent in their design, simply because it is a book – and it takes time to flick through to the answer page buried half way through the thing. The format itself creates suspense.

I am no Luddite espousing the virtues of paper over digital – and as soon as certain publications are available in digital format and my budget supports it, I will gladly switch to reading magazines on a tablet device when in bed. No more squinting through reading glasses at Private Eye’s microscopic text as I can resize the text as I want. Can’t wait!

But, just as a smartphone destroys delays, so would an e-book.

Fighting Fantasy needs to be in print format, and needs to have that vital thumb action as pages are flicked to get to the answers. A good game is one where the bottom corner of the book is curved thanks to repeated thumb flicking action.

You wont get that with a mobile phone.

Anyway, who’s off to the Citadel of Chaos?