The last frost fair took place 200 years ago about nowish — if you ignore the recent frost fairs on the southbank, which involved neither frost, nor very much fair to be frank.

The frost fairs were possible thanks to the water flow being both impeded by the narrow gaps between the arches on the old London Bridge, and the fact that the Thames in those days was much wider than it it today.

Another factor is that the river was also a lot more crowded then than today, which helped to slow the water flow around moored boat hulls and let the ice start to build up.

Construction of the Embankment, and destruction of London Bridge put paid to the Frost fairs, although icebergs did appear in 1854. They shall never return. Or could they? 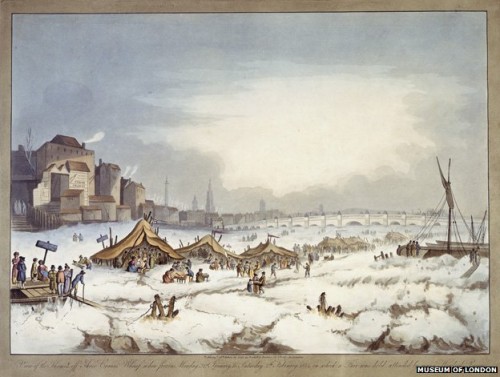 The weather is a bit of an issue, and even in ye olde days, it wasn’t common for the weather to be cold enough for a decent frost fair. Even the one 200 years ago only lasted a few days.

But what about slowing the Thames.

Well, actually, it’s not impossibly difficult to do that.

The easiest is the newest barrier on the Thames — the Thames Barrier. While famous for stopping flood waters from entering London, it is often used to slow a flooding Thames from leaving and hitting an incoming tide.

Also less well known is that the barriers can be rotated so that they look like they are blocking the river, but in fact there is a large gap underneath.

That enables the river to be slowed down, particularly at the surface area, but not to flood the city.

Unfortunately, the Thames Barrier is also in the middle of a major traffic lane, so closing it for a number of days at very short notice is not ideal.

Could the same effect be created upstream of London Bridge?

You could plan in advance for a series of barrages that could be placed between the bridge arches to slow the surface river flow and let a pool of water build up, while letting tidal flows move at the bottom, and that could potentially spur the creation of an ice covered Thames. But difficult to justify spending a fortune on such equipment on the off-chance that it might be needed at some point in the future for a couple of days of fun.

It can’t be beyond the wit of mankind to take the conventional winter ice rinks that pop up around the city and mount something larger, but similar onto slightly sunken barges and moor them in the river to create the illusion of a frozen lake in the Thames.

It might not be as authentic, but it could certainly look the part. And unlike the old frost fairs that lasted just a few days, this could last for several months at a time.

And at least it could be planned in advance, and all the necessitates of a modern frost fair in the form of food and drink and roast boars can be delivered. And maybe an elephant.