Published 7 June 2016 by By Ian Mansfield Events and Tours 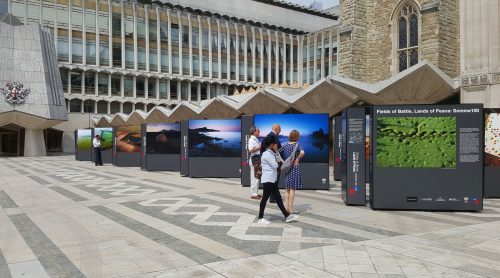 They are of the landscape of the WW1 battlefields as they are today, still marked by the impacts of weapons, the graves of the dead.

This outdoor exhibition features images of the present-day battlefields alongside archive pictures of the trenches during the Great War. 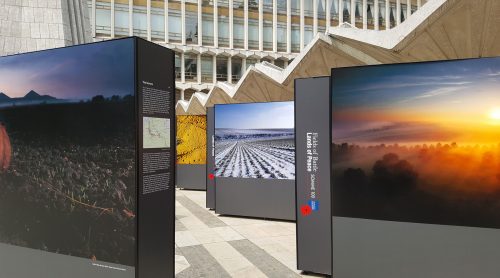 Some of the photos are of the effects of the war as it happened — churned up soil covered by grasses but still not worn down by nature.

One particularly astonishing photo is of a massive crater in the countryside. The sort of thing that looks more like an encounter with a meteorite than something man-made such is the scale of this one impact on the landscape. 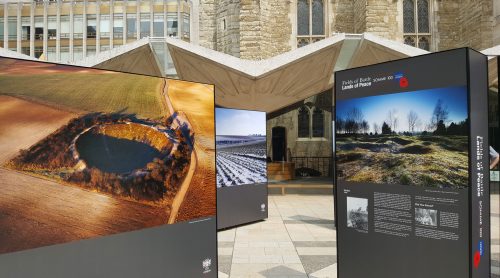 However it is possibly the interjection of a more regimented structure into the rural landscape which tells a sadder tale — the graves. In the UK we are used to seeing war memorials, in urban areas, with a church, and shops and houses around them.

Here, are photos from the skies of white lines of graves, in a little enclosure, and surrounded by no one. Alone and isolated they will never be looked at by the casual passer by.

Such military precision in death, in nature’s organic surrounds. 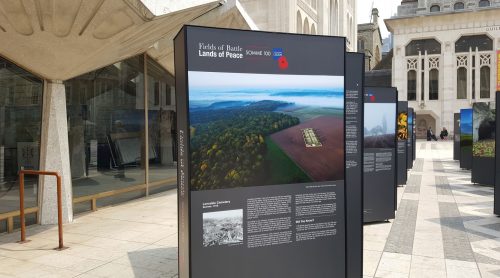 The display is outdoors, so free to visit at anytime until 3rd July (except this Friday 10th June due to an event).

On the other side of Guildhall Yard is St Lawrence Jewry, and they also have a couple of small display cases of mementos from the war.

One is, unsurprisingly a collection of small Bibles offered to soldiers heading to war, sometimes with messages about how God was on our side. It was a considerable shock to “our side”, when it turned out that Germans were also issued with Bibles and messages that God was on their side.

God it seems, is a bit of a turncoat.