Obviously, it never took place, but recent plans for Crossrail 2 have indirectly resurrected the proposals, although this time as a possible extension of the Victoria Line instead. 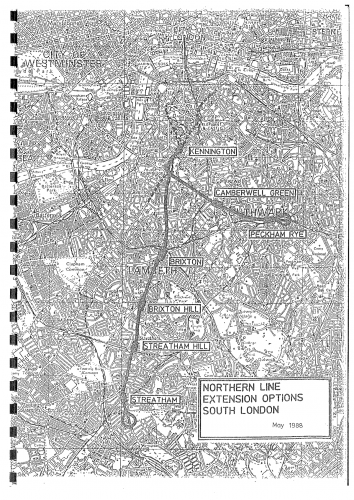 But back to the 1980s, and in 1988, London Underground carried out studies into four proposals that would have seen trains currently terminating at Kennington continuing on southwards to new destinations.

Of the four — to Streatham, to Peckham Rye, to Tulse Hill, or to reuse the deep level shelters and double up tracks to Balham — only the first two were considered in any detail.

The new extension would have also ushered in the arrival of that other holy-grail of the Northern Line, a formal split between the City and the Charing Cross lines.

The 1988 “strategic review” noted that the ground conditions in much of South London are poor for tunnelling[1], composing mainly of sand and gravel. In many areas, the new tunnels would pass below the water table, requiring compressed air, or a slurry shield for the tunnel boring machine to function.

An earlier report into the Bakerloo Line extension showed that the Northern Line to Peckham Rye would pass through soils that are difficult to tunnel through. However, for the possible extension down to Streatham, it would be water logged soil only as far as Brixton, after which the conditions for tunneling improved markedly.

Regardless of where the line would go, there was the question of turning around trains fast enough to meet a 30 trains-per-hour requirement, and there could either have been a loop, as at Kennington and Heathrow, or the construction of three platforms instead of the usual two.

If the loop were to have been adopted, a spur would have allowed for faulty trains to be stored off the line, and a novel idea of including a maintenance pit in the siding itself could have assisted with faster repairs.

The Streatham route follows the A23, running deep to pass beneath sewers and the Victoria Line at Brixton. There are four new stations on this line, at Brixton – interchange with Victoria. Line, Brixton Hill, Streatham Hill – interchange with BR services to West Croydon, and Streatham – interchange with BR services to Sutton. There is a terminating loop at Streatham. After Brixton, there is a sustained 1 in 50 gradient to Brixton Hill, but as the gradient of the street above is similar, the line remains at about 30 metres below ground level. It should be noted that there are gradients of similar slope and length on the Hampstead Line, so this one will not be a limiting factor on the line, even though it is more severe than is normally recommended. Beyond Brixton Hill, the line can be built on the hump station profile. Most of the alignment can be kept under streets, without introducing sharp curves, except between Streatham Hill and Streatham, near stations and around the terminal loop where it passes under houses.

The route follows the A202 Camberwell New Road, to Camberwell Green where there is a station. It then roughly follows the old Bakerloo Line extension route to Peckham Rye where there is an interchange with BR and a terminating loop. The ground is fairly level, so the railway could be built on the hump station principle, to assist with energy conservation.

None of the stations were described in any detail, although it was presumed that apart from the physical need to get down to the tunnels, most of the station building would reuse the existing British Rail station facilities.

The exception would have been either of the proposed Camberwell Green or Brixton Hill stations. Camberwell Green being a sub-surface station, tied in with a series of proposed subways under the local road junction.

The whole project, would have come to £264 million for the link to Streatham, or £175 million to take the line down to Peckham Rye. Those costs excluded the need for additional trains, and a presumption that soil conditions didn’t prove to be worse than expected.

Quite obviously, the plans never happened, and today the Northern Line is heading off in a different direction, towards Battersea. Meanwhile, the Bakerloo Line may finally provide a station at Camerwell, or not depending on how that consultation determines its fate.

And while the link to Streatham is dead as far as the Northern Line is concerned, a report into Crossrail 2 from last June[3] noted that CR2 could relieve congestion on the Victoria Line to the level needed to support that line being extended down to Streatham. The line already extends past Brixton a decent enough distance in anticipation of a future extension.

And finally, following the recent consultation on the Bakerloo Line Extension, TfL is currently reviewing the case for the proposed extensions[4], including different route options and possible station locations across south London.

Here are how the tube map might have looked… 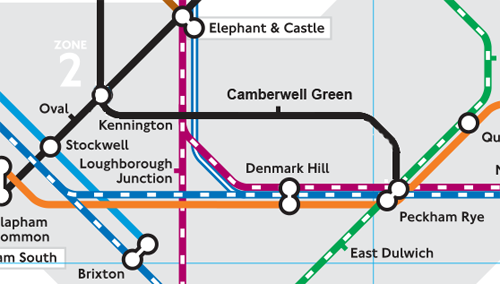 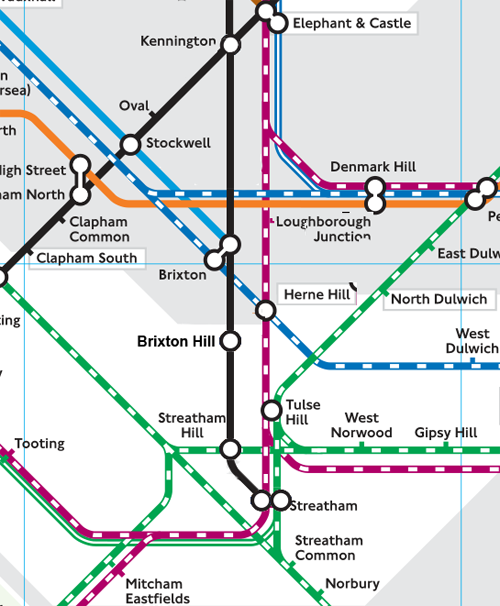 4] What Do They Know